This will be a continuing theme. We woke to a dazzling dewy morning in a soaking wet tent. Fortunately though we had managed to pitch it in just the right place to greet the morning sun. Also once again I was delighted with our narrow and long groundsheet, it was perfect for rolling up our Therm-a-rests and sleeping-bags.

We quietly cycled our way through an empty and very pretty Middelhagen. The morning sun was soft against beaten skin and the breeze was just enough to keep us awake. Before long we were at Lobbe and the east coast of Rügen. We cycled north along busy streets of tourists enjoying posh-looking outdoor breakfasts. At 10am we noticed families heading towards their packed cars and heading to their next port of call; it seemed this island was synchronised. Eight o’clock rise, nine o’clock breakfast and 10 o’clock leave.

Generally speaking, my advice to cyclists would be to avoid the east coast; it was boring, with too much civilisation. At the entrance of the Ferrendorf forest we bumped into a rather frazzled elderly couple, they had lost their tandem-cycling granddaughters. We promised that if we found them we would point them in the right direction. Five minutes down the path we bumped into a duo of cackling cycling German lassies. They looked a bit horrified when I signalled for them to stop. It turned out that they had taken a wrong turn. The forest was lovely but not well signposted. Five minutes later we also took a wrong turn and ended up cycling with another lost biker alongside a busy road. We skirted Baabe and cycled along an industrialised route into Sellin. Here we took our lives into our hands pushing our bikes across train tracks and busy roads.

I had hoped to surprise Sharon with a second breakfast stop in a previously visited restaurant, but there were just too many people, too many cars and not enough useful signs. We cycled through town to the next forest. Oddly enough we had passed a few larger supermarkets this morning, but none of them were convenient enough to warrant a stop. We had not purchased our yogurt for our second breakfast. Our bodies were running low and we were determined to stop at the next rest stop. This rest area was right at the start of the forest and was infested by about 20 silent gawking teenagers and their amused looking teacher. We stopped in this sunny spot, pulled out our water bottles and muesli bars, strung up our clothes line and genuinely looked haggard.

Shortly afterwards they moved on, which gave me the freedom to snatch Sharon’s undies and also hang them in the sun. Drying our washing is always a rather troubling undertaking. Most days we need to dry at least two shower towels, a dish-drying towel, a pot scrub, our groundsheet, sometimes a shirt or two and a pair or two pairs of undies. The pot scrub and tea towel usually dry strapped to my front panniers. The groundsheet is a quick drier and can be strapped alongside my bath towel on the back of my bike. Once they have dried I can replace them with a shirt or undies. Sharon has a similar routine for her bike. We tend to look like flying Chinese laundries. The hilarious part though is; whenever we stop, a clothes line is strung-up and washing hung up. No problem for me, but gosh we had to endure some flabbergasted narrow-eyed petulant glaring from the more prim and proper locals. At the beach these oversized people will strip off naked in front of you to don a ridiculously undersized pair of budgie-smugglers and yet treat you like an alien when you dry your undies over a park bench. 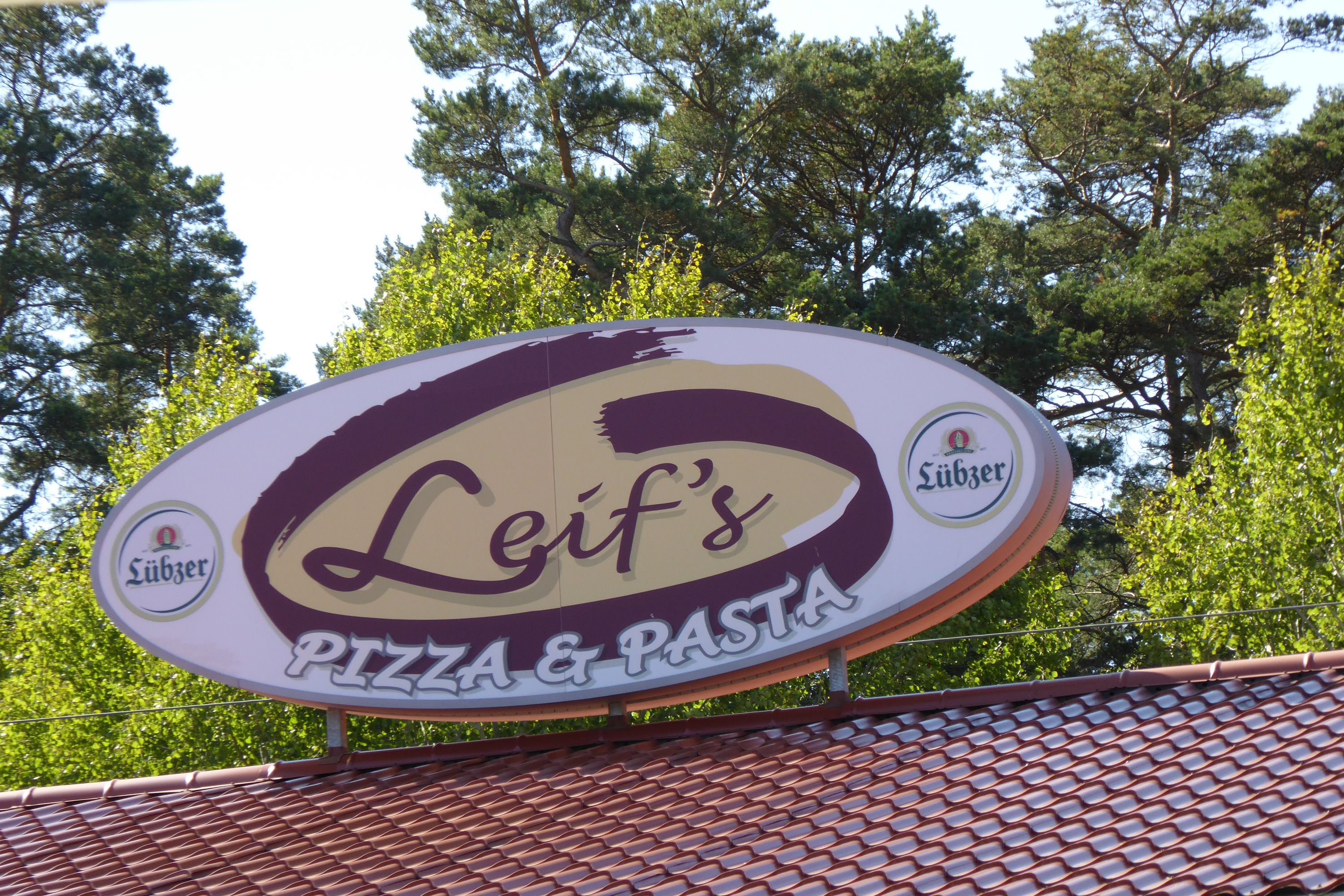 Cycling the forest was a nice ride along mildly hilly, hard-packed gravel paths. We popped out at a Lidl in Ostseebad Binz. At last a chance to buy yoghurt a sit alongside a conveniently placed lake for second breakfasts. The town and track was actually very nice, however time dictated that we carried on. We were mostly on quality sealed paths here, unfortunately they also followed the road. We stopped in Prora for an excellent lunch and about an hour’s worth of clothes drying at Lief’s Pizza and Pasta restaurant. My pasta was by far my highlight of the day.

Shortly afterwards the path went up hill and the day went down hill. The first six or so kilometres after lunch were okay, then we hit Neu Mukran and the access roads to Rügen Island’s busy international ferry port. Grrr. Suddenly flat independent paved cycle tracks were transformed into a rough gravel potholed track that intertwined itself with the busy road. On top of this, the gradient started its slow assent along very narrow concrete footpaths flanking the road bridges. And if this was not enough we also had a very strong side wind and an influx of cyclist who seemingly could not understand the difficulties of manoeuvring heavy pannier-clad bikes up narrow windy bridges centimetres away from rushing trucks. This section of track was the ugliest and nastiest of the whole journey. It was also the only time on any of our journeys that we encountered selfish cyclists.