From the ferry roads we had a long uphill stretch that lead us around the outskirts of Sassnitz until eventually and gloriously both cars and people faded into the distance behind us. Unfortunately the wonderful cycle path also stopped. The track turned    mildly steep and into nasty bumpy cobblestones. This was our welcome to the Jasmund National Park. We stopped at the first seat that we found, had a cup of tea, caught our breath and enjoyed filtered afternoon sun shining through the tree canopy.

There were many signs here, most of them pointing to 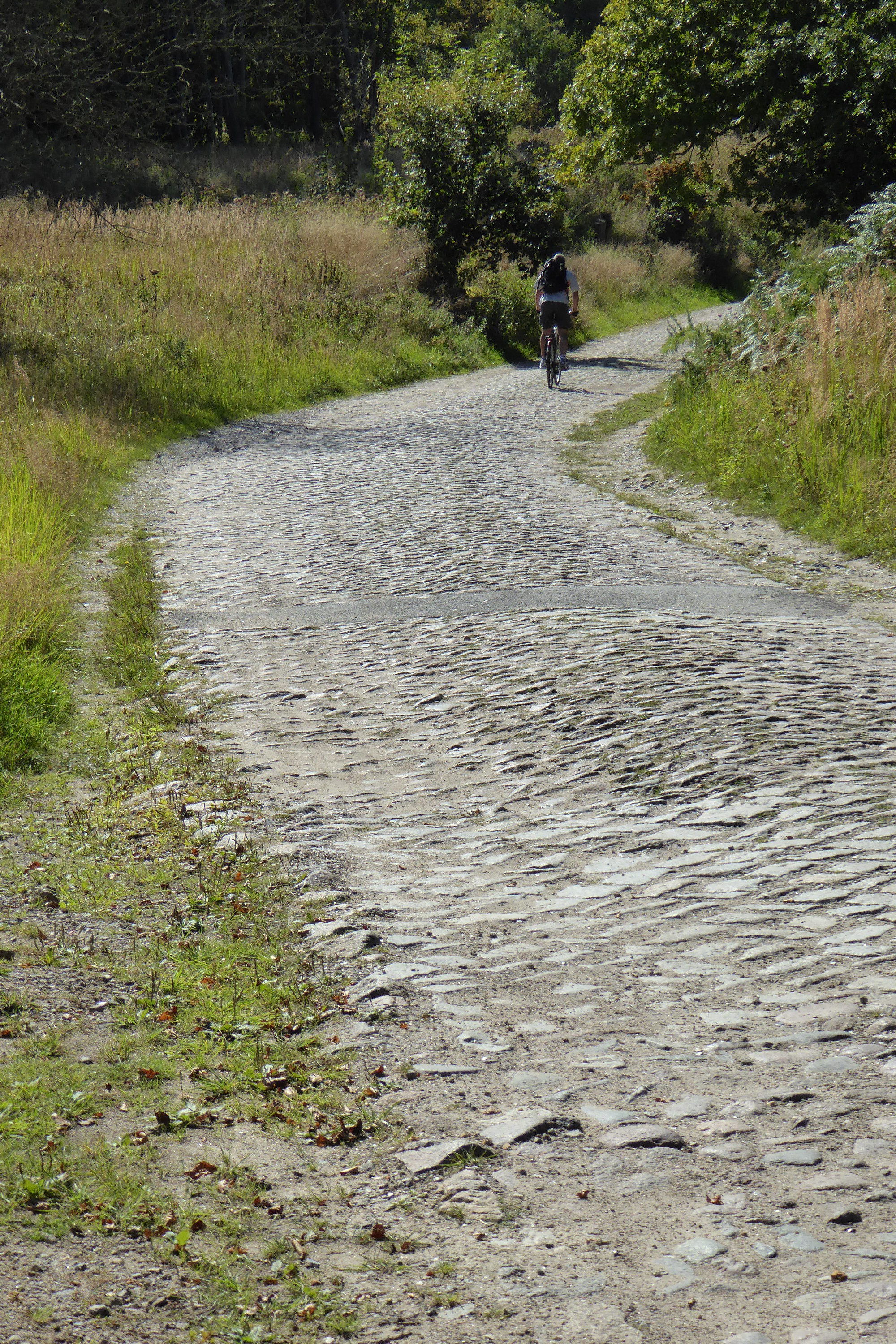 the same two places, it seemed unlikely that the mud path I was looking at was actually the main cycle route around the island, but it was.

We plunged forward into the forest. It was very quiet in there, slightly sandy with little hillocks and muddy valleys. It was nearing the end of the day and we were getting tired, most signs were a little ambiguous, but generally speaking if my internal compass kept focusing north, we would be okay.

We followed the track and followed the track, eventually it deteriorated into a very awkward seemingly unending uphill chunky cobblestone path. With great relief we emerged into a lovely wee peaceful glade. Sharon’s first words were, ‘we have been here before’. It took me a few minutes to recognise the spot – she was correct. Then the sinking realisation settled in that we had just done a 10km circuit through the forest and over all of those ugly cobbles. So much for my internal compass.

Deflated and tired, we realised it was time for plan B. We decided we did not need to see the cliffs we should have been heading towards and to cut out the northern section of the forest. We headed back into the forest and followed the same mud track for the next two kilometres, before turning west and eventually out of the national park.

As soon as we left the canopy, of trees we were greeted with hot blasting sun and yet more cobblestones. The difference this time was we were on a road. We had learnt with cobblestones that at the edge of the stones there is often a very narrow smooth dusty trail. However both edges of this road were infested with brambles that persisted in tugging at our drying washing and the clothes we were wearing. 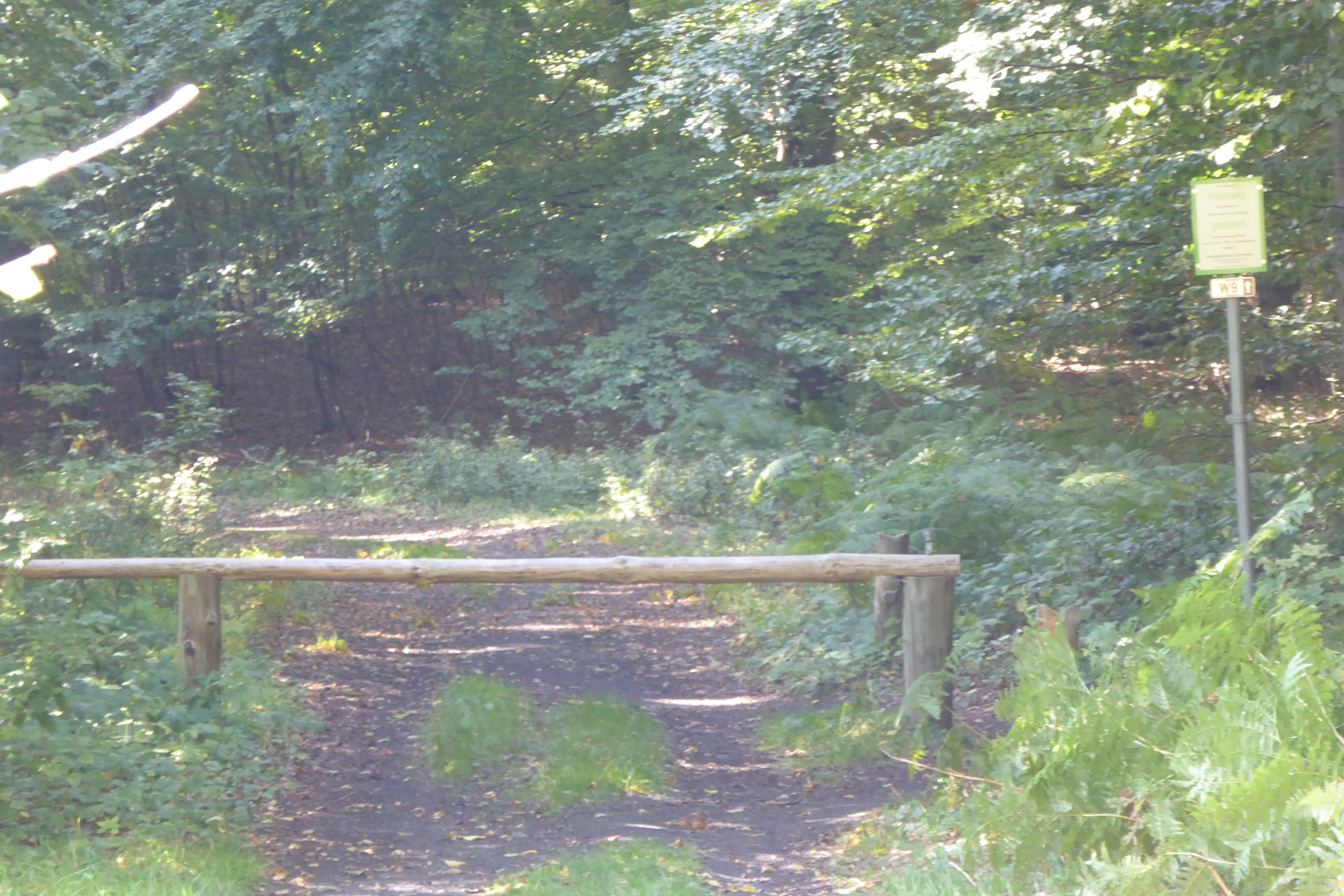 This was a hard infuriating ride. At one stage we stopped at a farmhouse and lent on their fence hoping for some friendly direction and encouragement. Rather upset to see us, begrudgingly a man walked over and told us to keep cycling and eventually we would hit a sealed road.

After four kilometres of cobbles and quite far in front of Sharon, I hit the main road. Whilst waiting I watched a vintage tractor being driven up a side road by a four-year-old sitting on his father’s lap. It was a beautiful sight that flooded back a lot of childhood memories.

Bedraggledly Sharon appeared and without stopping we quietly crossed a busy road and continued cycling. We once again had the luxury of a paved independent cycle path and rejoined the official track in the cobblestoned village of Gummanz. We were too tired to really notice our surrounds. We cycled across the front lawn of some kind of resort and eventually found our way to a sheltered spot between a cornfield and tennis court. It was supper time. Couscous, tuna and chilli were on the menu.

From here we had a lovely mostly downhill cycle track, around a lake over a bridge and into the bustling town of Glowe. We been searching for a cash machine pretty much since we hit the island. I called into a supermarket and asked where an ATM was. The friendly man behind the till informed me that if I purchased something and withdrew to the combined value of 300 euro then he could give me cash. 300 euro was more than our entire budget for our time on the island. I said ‘no thanks’. However he did say there was an ATM in the next town. So off into the dusk we rode.

We ended up at a pier in Breege. This village was gorgeous, but darkness was falling and we could not afford to stop. I asked for directions and was sent back in the direction from which we had come. It seemed that we had ridden past the cash machine. We stopped a second time for instructions and were pointed toward a very tidy little building at the edge of a car-park. We would have never have known that this perfect little building housed an ATM.

Smelling, tired and a little cranky we cycled into the night. A few kilometres up the road and just after 9pm we arrived at the camping-ground. This place was flat, sandy and right on the beach. All its amenities were beyond the usual standard of German perfection. The annoying part was the showers operated on a prepaid card system. The payment card had to be purchased from the camping-ground’s closed shop. We fell asleep in the fug of each other’s body odour.

It was a hard and exhausting day. We survived 82.68 kms and though our night’s accommodation was busy, we were happy to have left the populated parts of the island behind. 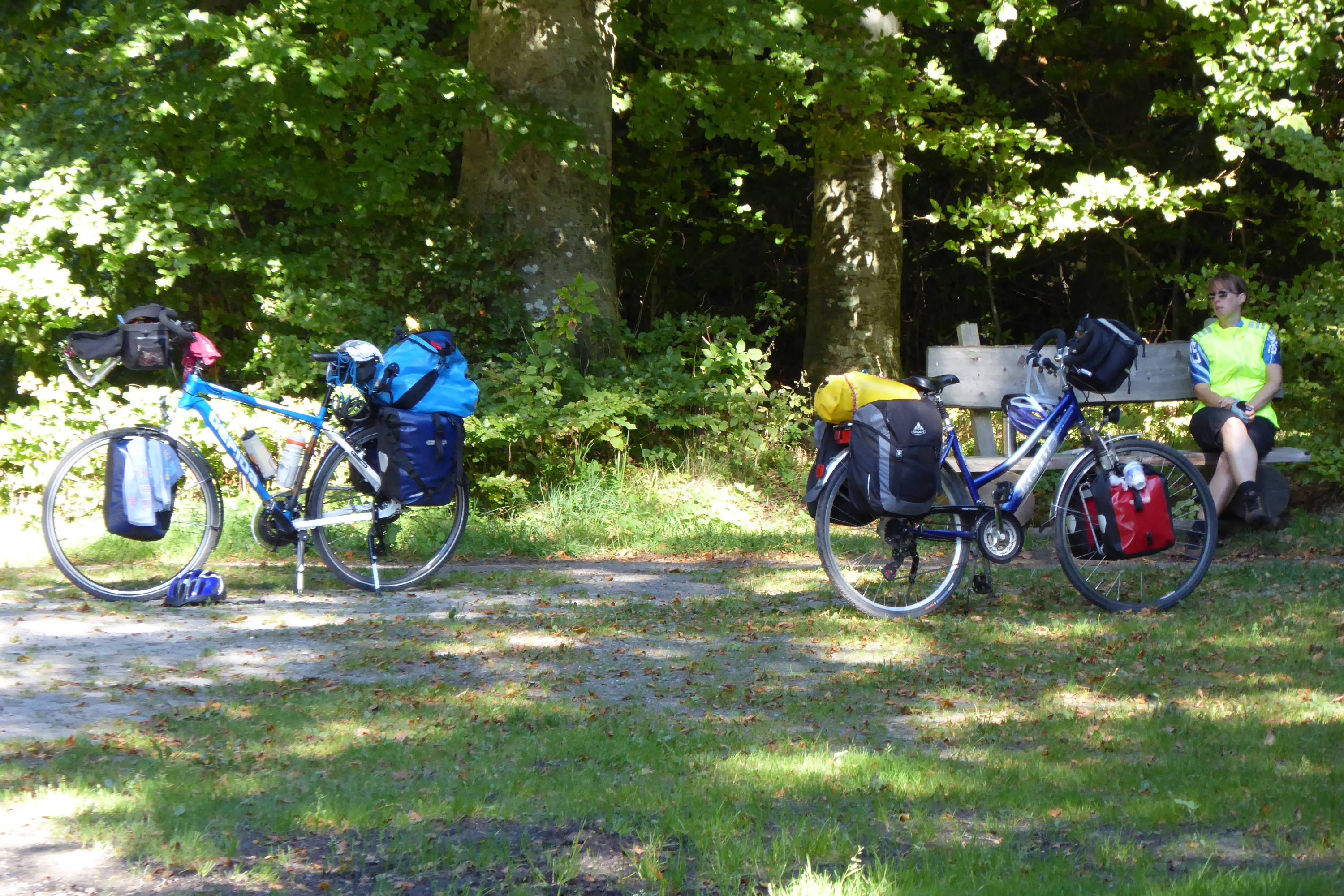