Well, it was all a bit scary venturing out into non-native English speaking countries, but it was a risk worth taking.

My first gig for “Number 8” was in Berlin I arrived rather unrehearsed and a little tired having just finished attending a conference that afternoon. I have yet to experience Berlin to its potential, however it is a city that makes my blood boil and I enjoyed every moment I was there. 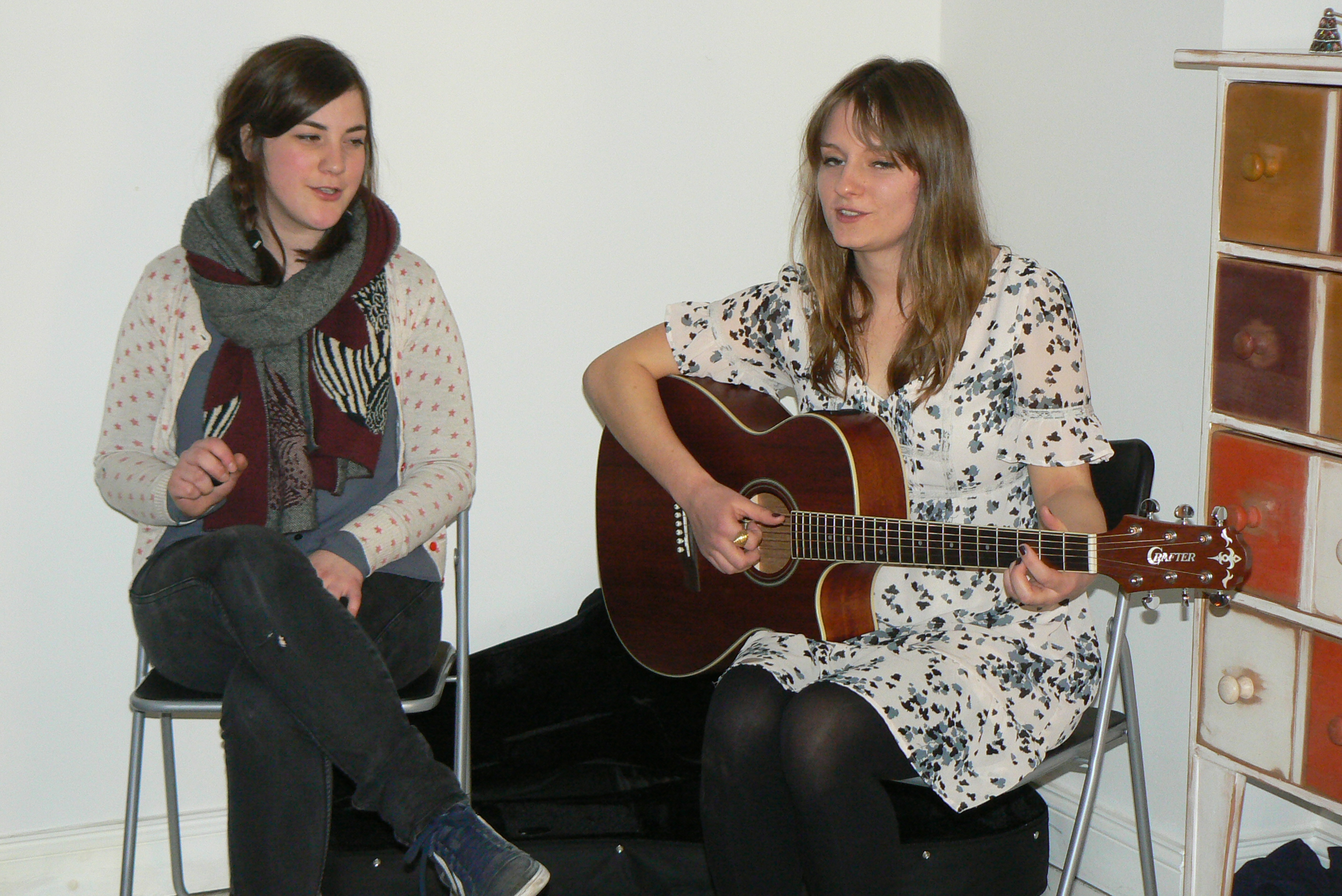 My opening gig was a ‘house gig’ that was related to a group called something like ‘wine and more’. It was a lovely venue and my support act ‘Fefa‘ was simply the perfect compliment for poetry. Lovely audience, but as I have learned big city people are often quite reserved. 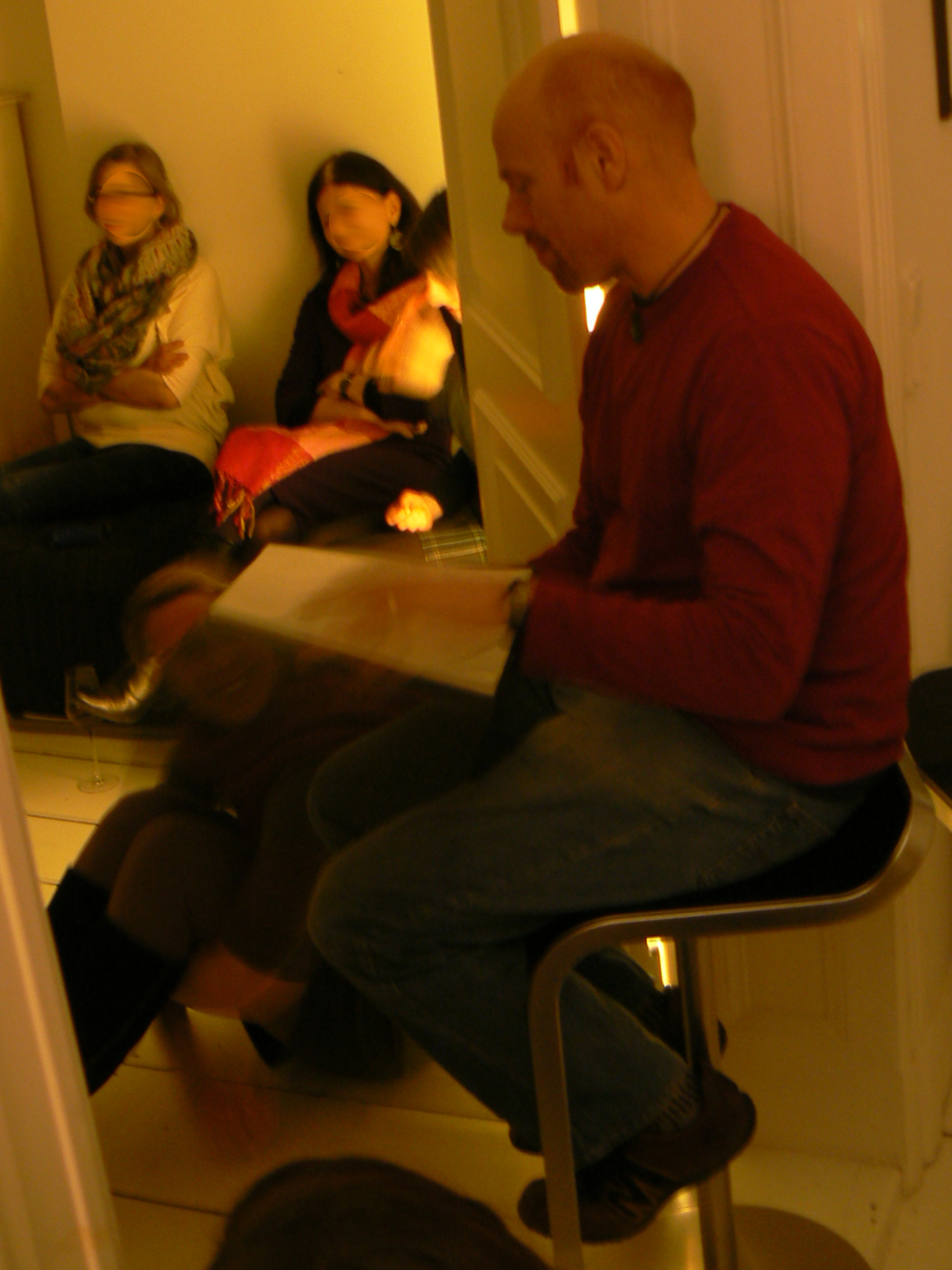 The next day I had a 262km drive to a lovely wee town called Chemnitz and was hosted by an Irish couple in an English speaking church. The level of English was not actually that high and I had to simplify things as I read. I spoke after worship as part of their Sunday evening church service. After this gig I had a lot of positive feedback from some really lovely people. 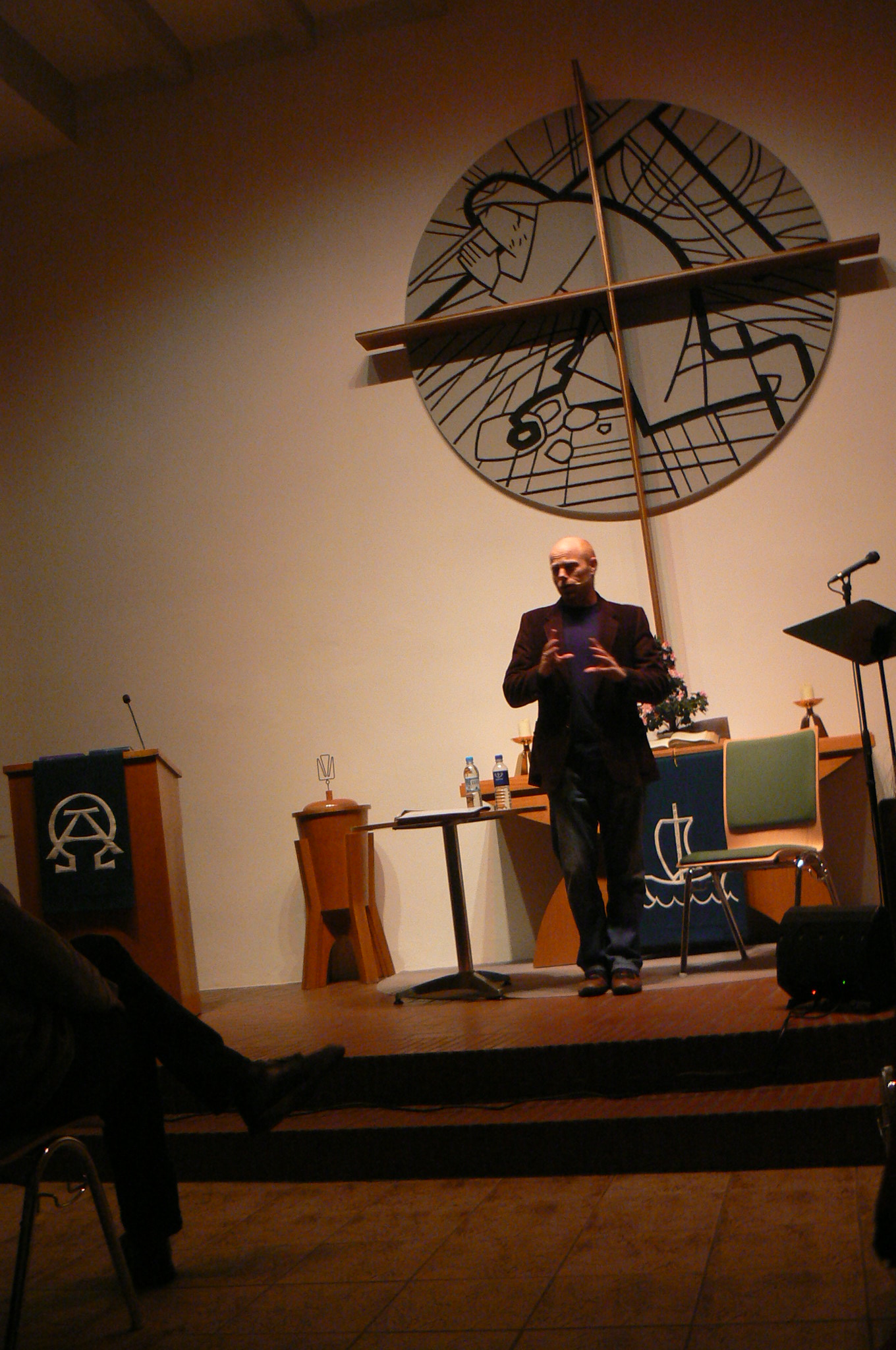 The next morning I left relatively early, eager to cover the 528km of snow-laden autobahn as quickly as possible. My host and support act in Balingen was a friend whom I was eager to see. Perhaps the highlight of my whole trip was reading ‘Emo’ this evening and watching the contrasting reactions from the audience. 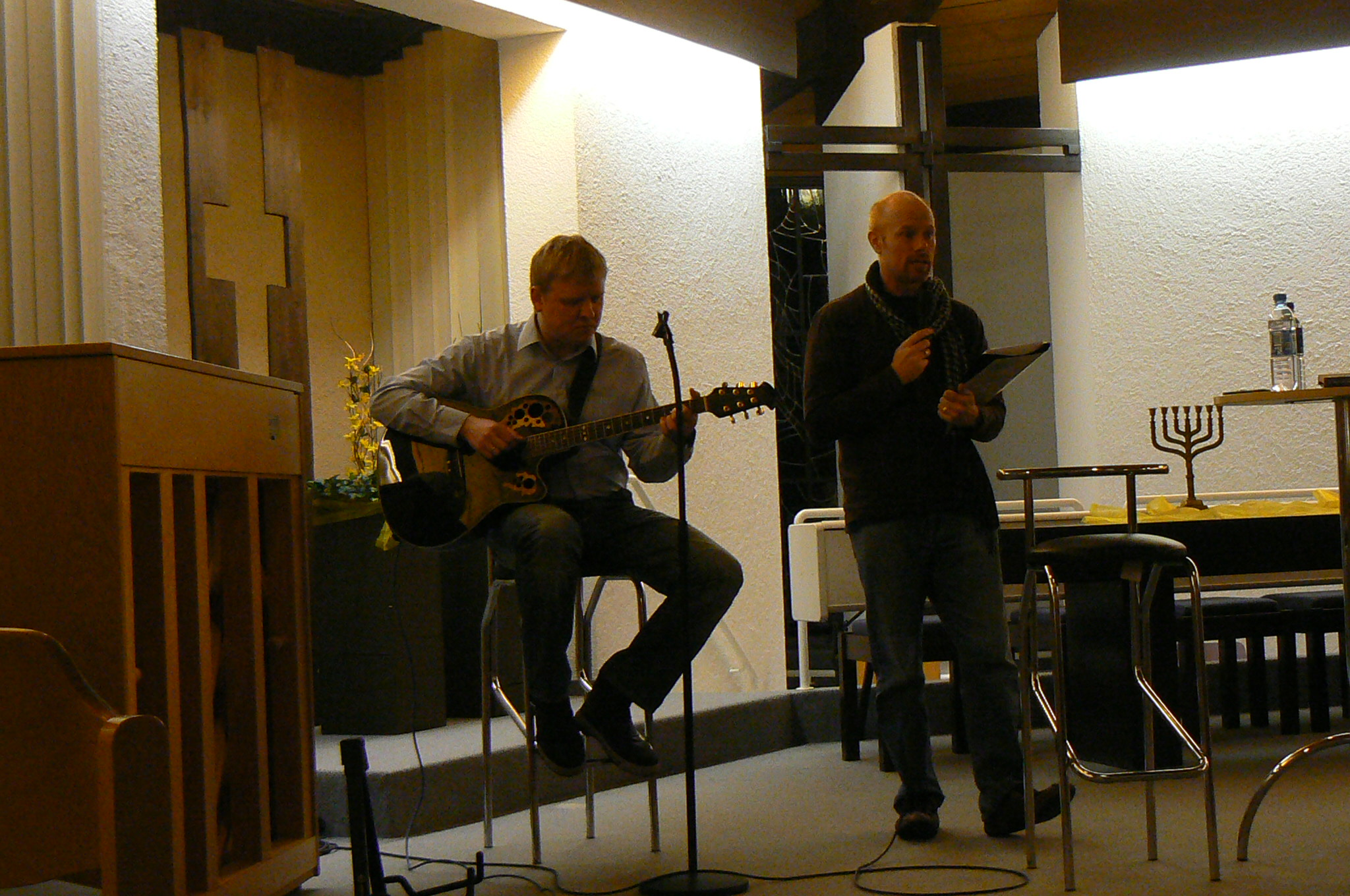 My three gigs in warm, responsive Germany definitely blew away my preconceived views of German culture. 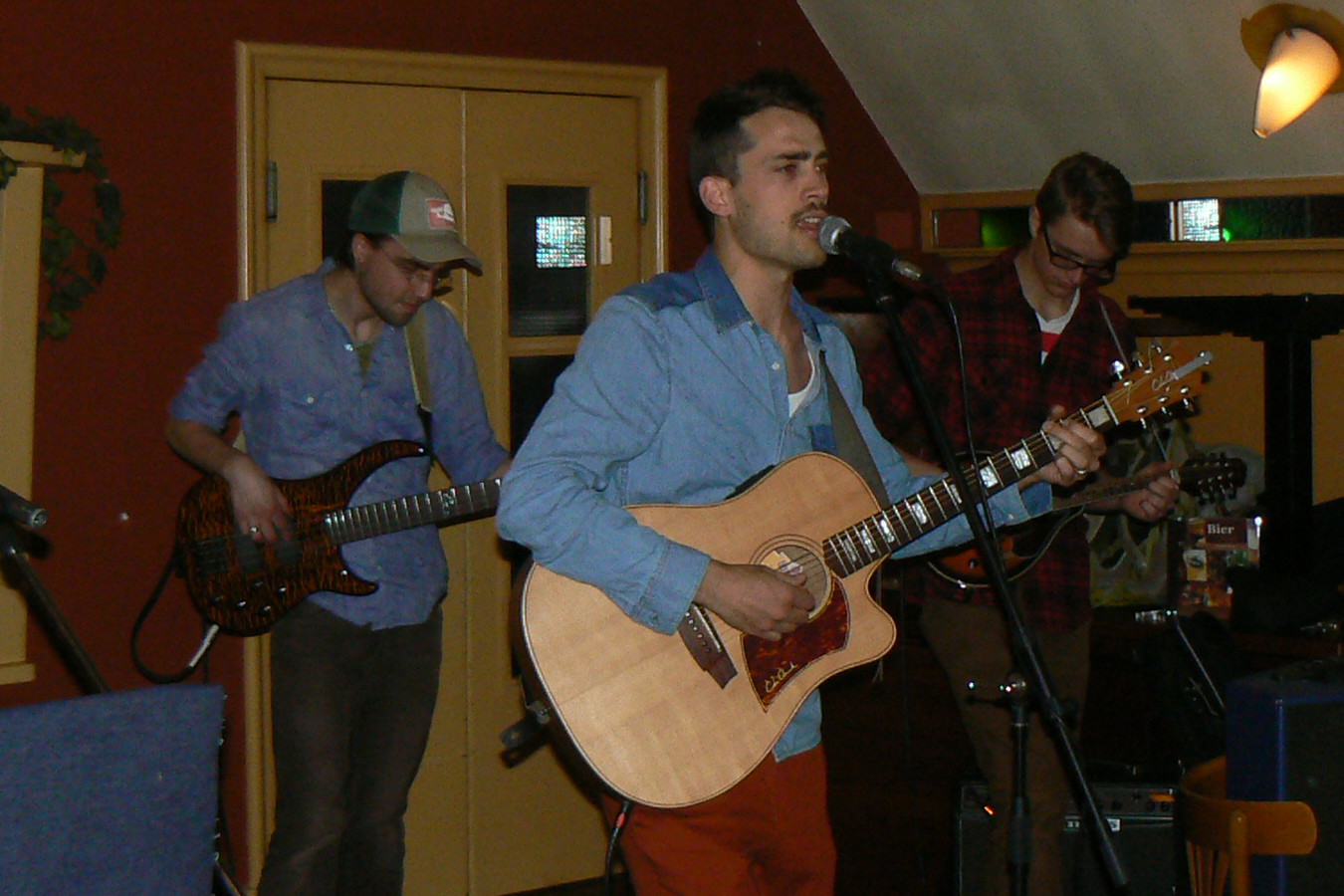 Gig 4, my hump gig, was another 610km away and it was snowing hard for most of that journey. Gig 4 at Eetcafe in the Dutch city of Wageningen was also to host the launch of my latest book “Verses for the King” I was very tired this evening, but buoyed up a little by being around friends and with the music of ‘Cheeses of Mexico‘.

It was a good night, the launch changed my routine and helped me keep focused. The actual launch took place as the crowd joined in with a NASA style countdown coming through the sound system. As the count hit zero, a cloth was ripped off a music stand revealing a lonely copy of “Verses for the King”. At the time I was giggling away like a kid in a candy store. 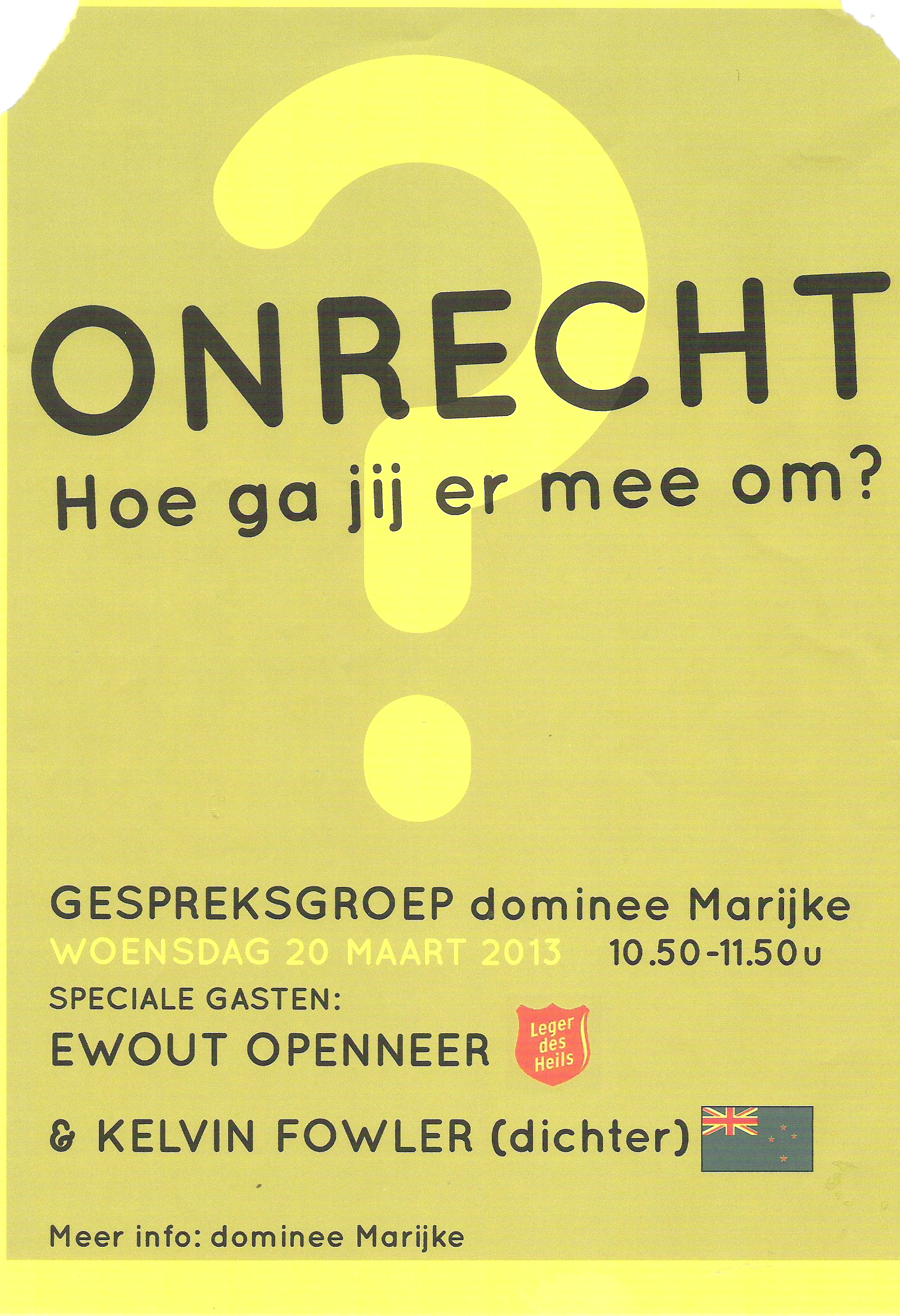 The next day was a double-gig day and I love double-gig days. Gig one was in a prison in Arnhem; I did not actually read much poetry, but did share a lot. The prison was perhaps my most meaningful gig. I was asked to return in the afternoon to keep talking with the men, fortunately I had the time to do so. 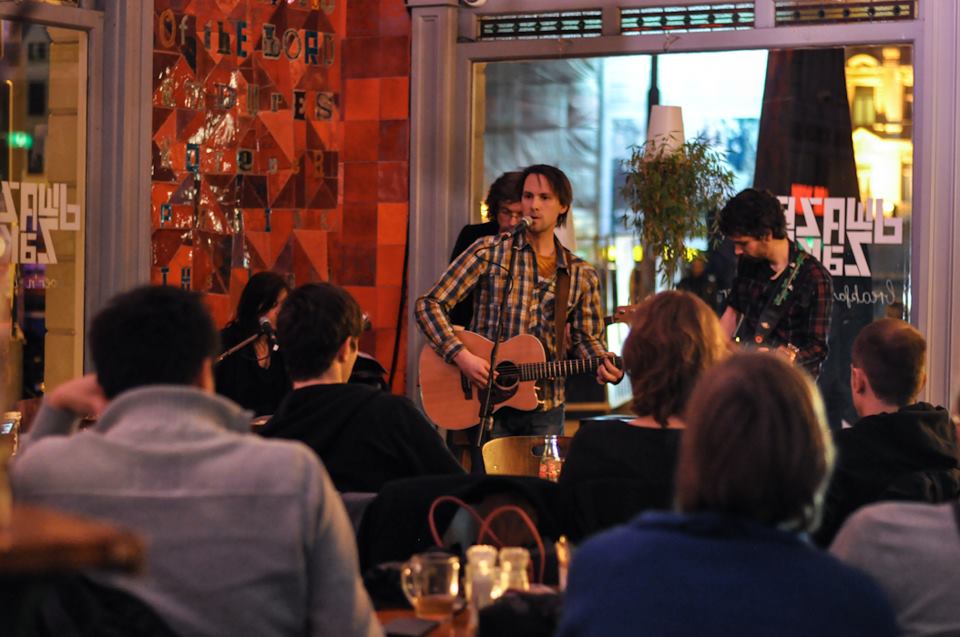 The evening was spent at Dwaze Zaken in Amsterdam and was run to the theme of social justice. My evening started with practically jamming “I Am His” with Schrijvers Voor Gerechtigheid, who are a great band. I could not understand their lyrics but totally dug their level of musicianship and their style. However Amsterdam was maybe my hardest gig of the tour, perhaps mostly because of a fold-back speaker that I couldn’t turn off and big city reserved people. 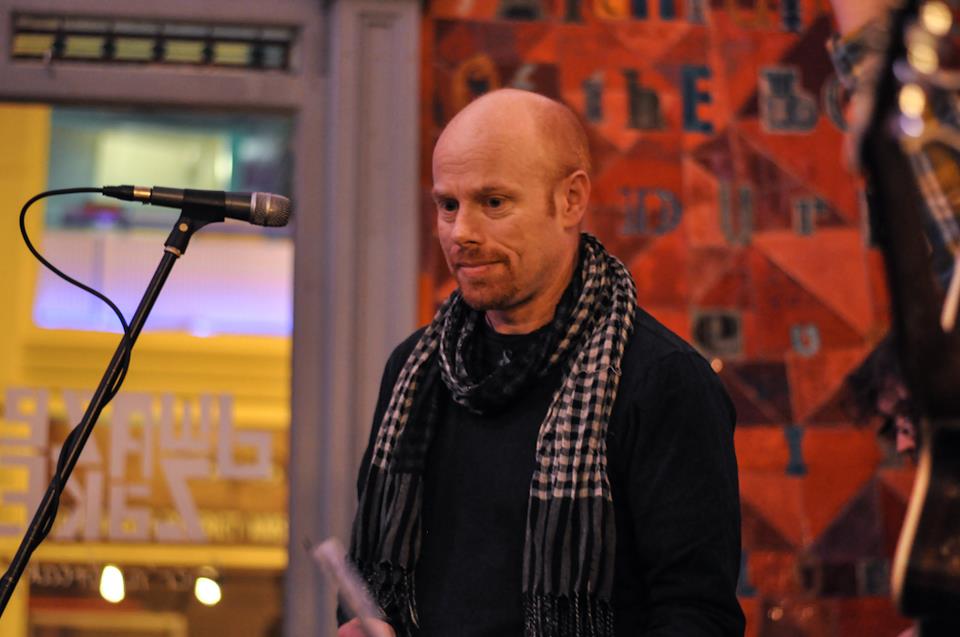 That evening, I caught the train back to Utrecht, where I enjoyed the luxury of sleeping in and spending two evenings in the same familiar bed. The next day I walked down to what I call “Vicky Road” and purchased yet more second-hand CSI dvds and just generally lounged around. 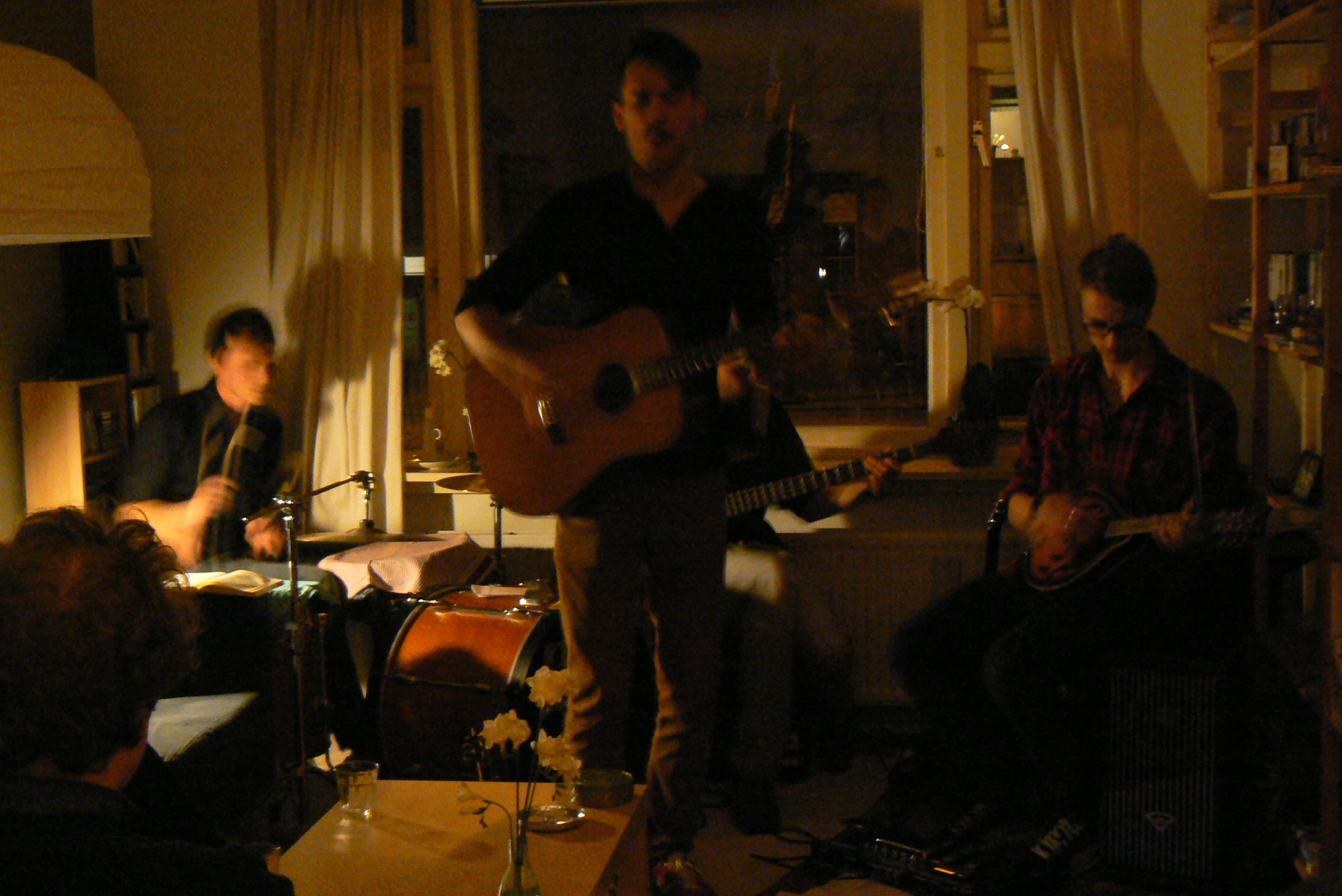 The evening gig was pretty much below my bed, which to my delight meant that changing out of my slippers was unnecessary. The support act was once again the lively fun ‘Cheeses of Mexico‘. I had to bribe the forever well-mannered Dutch audience into responsiveness: though a little embarrassing this worked with some success. The room was full and the people were fun. 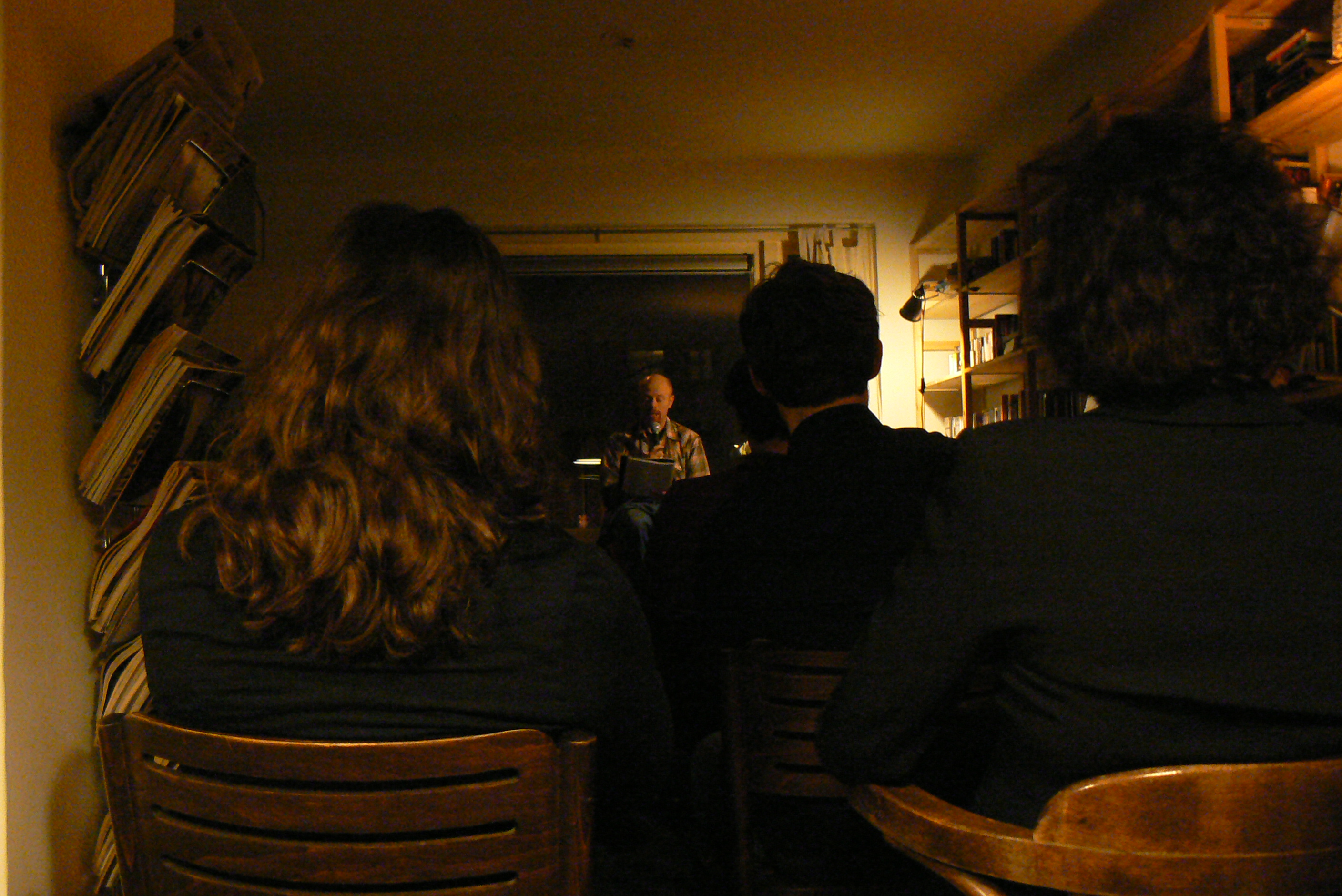 In the morning I had lunch in town with a friend and spent the early afternoon cheese and gift shopping before heading to Armsfoort. Late afternoon I enjoyed my first Dutch city cycle trip. My final gig that evening was my smallest gig, unplugged and without a support act. The people were responsive and even dared to ask questions. I perhaps enjoyed this gig the most. 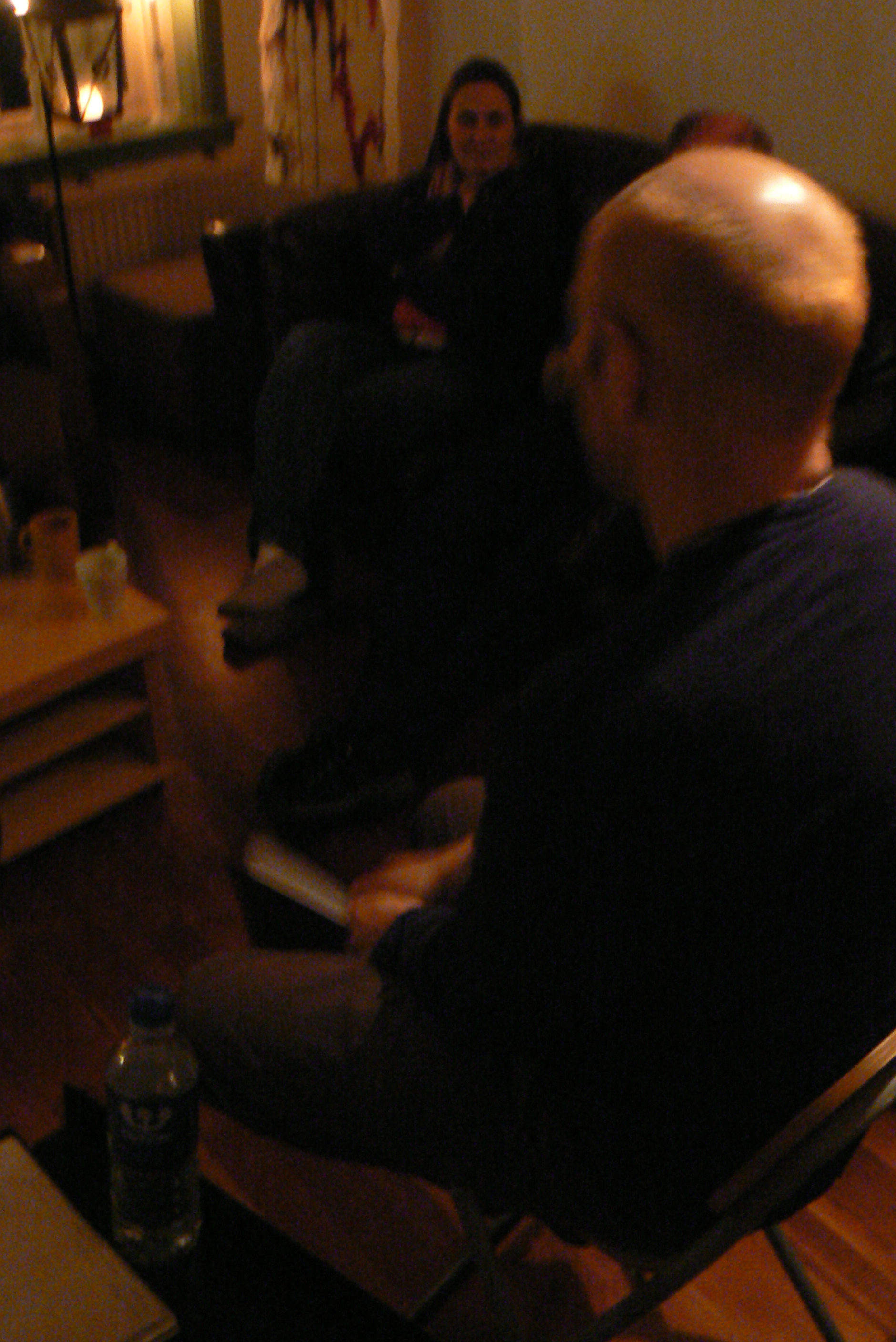 The next day I had another 600km drive to my ferry in Kiel. I stopped at a friend’s place on the German border, went for a walk and a cold windy and very quick 25km bike ride. Racing through the snow I made the ferry with five minutes to spare.

I am happy to say that my books sold quite well and I more than broke even financially for the tour. The short Dutch travelling distances helped this. Generally speaking and especially in Germany people cried, sighed and laughed on cue. I was not quite prepared for the Continental European long deep thinking silences, nor was I prepared for the intelligent compliments and follow-up messages. Germany and the Netherlands were a good experience for me and one I would like to repeat one day.

Overall I had a good and smooth tour, thank you very much to all my hosts, organisers and audiences; thanks for gifting me a wonderful experience.