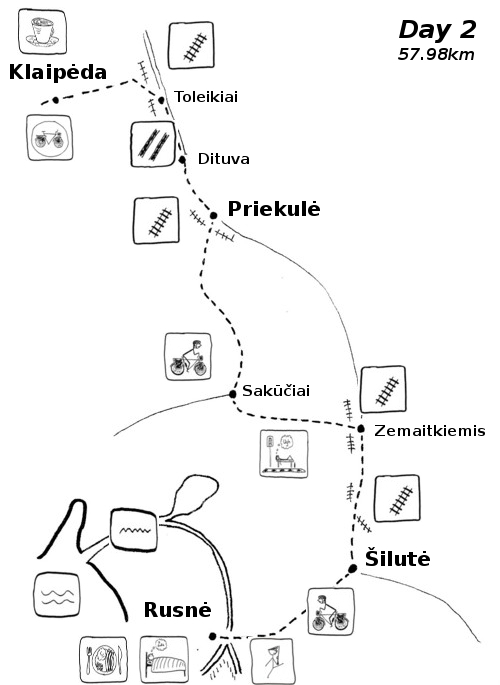 Within about five minutes of being back in the saddle I was over-taken by a tractor dragging a trailer. Usually this would not warrant a mention if it was not for the fact that the trailer’s tyres were shedding their rather poor attempt at retreads. I was rather suddenly and slowly showered with black heavy hunks of slow flying rubber. There was nothing that I could do: if I tried to dodge one piece, I got hit by the next, so I just rode it out and headed for the ditch.

23 kilometres south of the one-time Prussian capital of Memelburg, now known as Klaipėda, I hit the busy wee town of Priekulė. I love Priekulė, I would love it more if all those nasty, smelly trucks were forced to bypass it, however it is still cute and a good place to get a good feed. What I like most about it is its sleepy red brick Prussian architecture splattered with the occasional Soviet-built dairy[25]. I love its street florist, two cafes, idling oldies and roaming school kids. I giggle watching cars trying to reverse out of their parks onto the busy road. I guess one of the reasons why I like Priekulė is because it reminds me of many parochial provincial Kiwi towns.

This time I did not stop, I cycled right through, hung a right at some random monument, crossed a railway line beside some more gorgeous Prussian architecture and a cute wee church, then hung a left and headed south. A footnote: maybe the left actually came before the railway line, I forget.

On the outside of town I saw something so, so breathtakingly beautiful that it just warmed and delighted the cockles of my Kiwi heart. There is simply nothing more enchanting in the outside world than random roaming sheep by the wayside. You are reading the words of someone who grew up watching sheep dog trials on the tele[26], and who presently listens to a Radio New Zealand podcast that follows the lives of a family of sheep. A day abroad with sheep is equal to a hundred without their cute wee woolly faces. Anyhow I digress, back to the road.

The next 12 or so kilometres are some of the most beautiful in the nation. Flat, flat quiet roads embraced by farmed fields of dancing dandelions and handsome tulips. Oversized ponds reflecting Prussian red barns and barking dogs, dot the almost carless and careless wayside. Saggy swamps and meandering rivers nurture the fields and provide a sense of harmony and innocence. 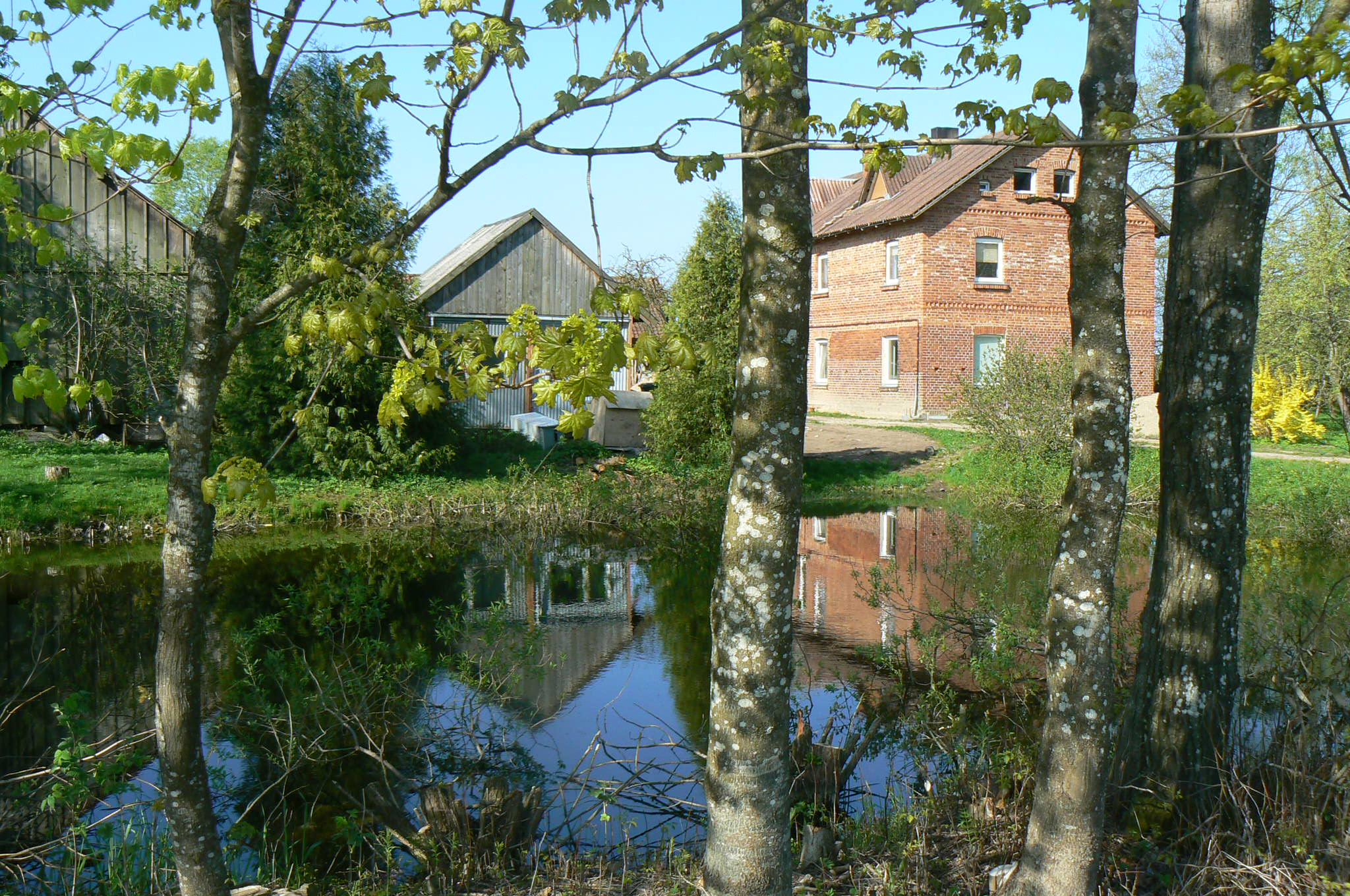 Everything was simply beautiful until the obligatory tractor dragging a tired and seemingly empty trailer overtook me. I pounced on the opportunity like a pro-cyclist and dug deep to get my front wheel about 20 centimetres off its rear and draft the sucker up and over a bridge. Seemed like a good idea at the time, but what I didn’t bargain on was the sudden bump plus potholes on top of the bridge. I was doing well at the time, felt as cool as Ramunas Navardauskas[26], right until that trailer hit the bump. What I didn’t realise, though the smell should have given me a hint, was that the almost empty trailer still had quite a bit of natural fertiliser in it. By natural fertiliser I mean that farmer Joe had spent all year collecting the cow poo from his Prussian red barn, had loaded it into this trailer, driven out to his field to spread it out in order to give the grass a lift, and was now returning with an almost empty tray supporting a not-so-small collection of liquid, runny and solid maturing cow-poo. And yes when he hit that bump followed by the bone-shaking potholes, I, 20 centimetres off his not so metaphoric butt, got fertilised. In fact I got utterly sprayed with stale stinky cow poo. Pity it doesn’t stimulate new hair growth.

I love windmills, or perhaps the correct words are wind-turbines, and this stretch of road supported a mosaic of turning turbines, grass green at the bottom and cloud white at the top. No matter how intrusive these things are, they still look heavenly and graceful to me. When we get to the eternal cricket match in heaven we will discover that the pitch is surrounded by wind-turbines with poetry written on their blades. I stopped for a photo and a drink. 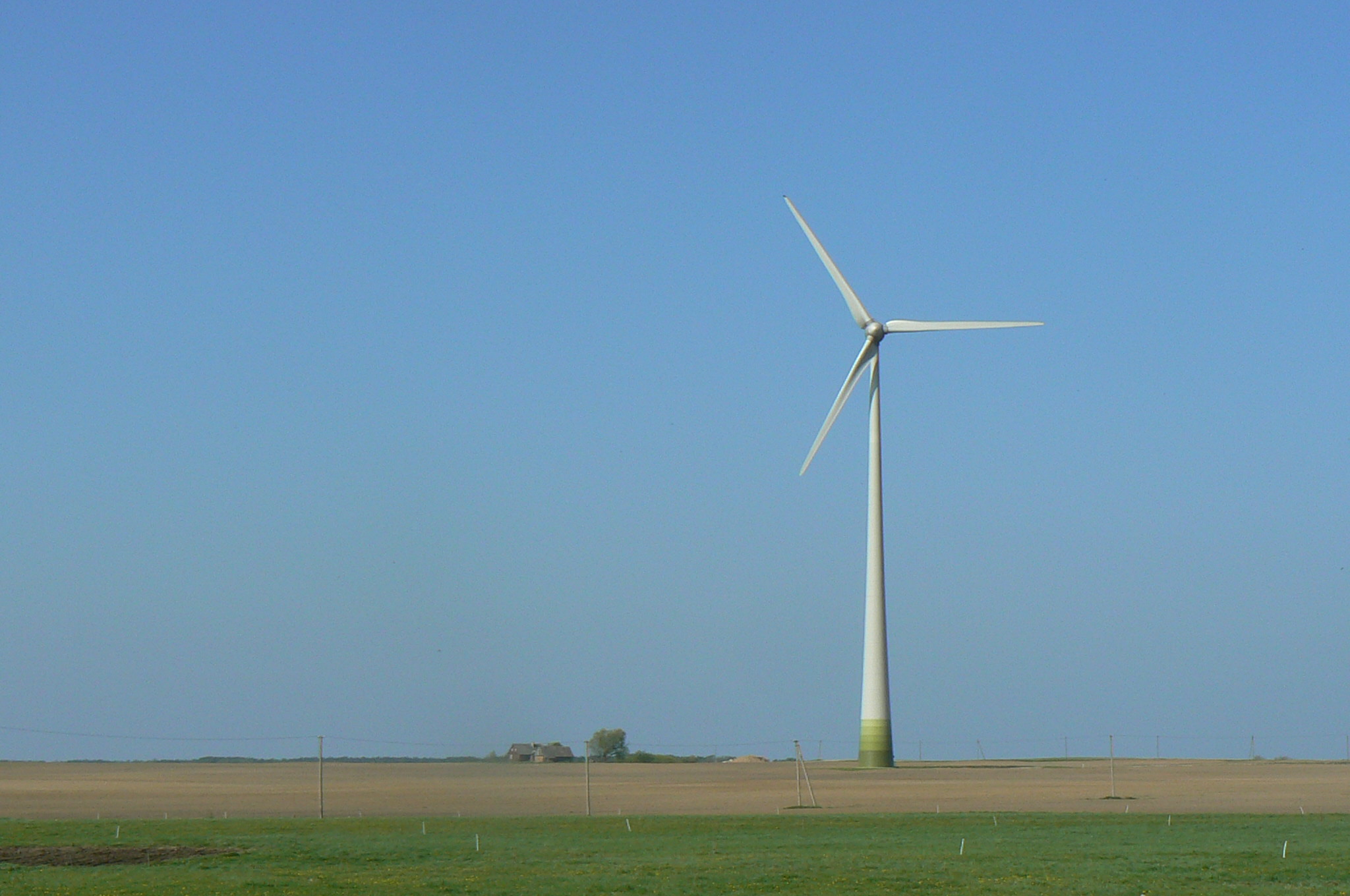 Next I stumbled upon the unimpressive village of Sakūčiai. In my world Sakūčiai is best known for its poorly sign-posted roundabout. For first time drivers wanting to drive south and visit the rather cute lighthouse and Ventė, the temptation is to drive directly through the roundabout into the tiny village rather than hang the right and head west in effort to get south. Are you confused? So was I the first time I hit it and was forced to complete a lap before heading off in the right direction. However on this occasion I was heading east, and given that I had not seen any vehicles since the dung trailer camouflaged cow poo amongst my freckles, I opted for shortening my trip by about a 100 metres and riding the wrong way around the roundabout. Altogether this was a good idea. I whipped over the bridge and again was lost in the beauty of the boggy, subtle and flat landscape.

I had somewhat been dreading this eastward turn, because I knew that for me, the vulnerable cyclist, that it meant turning into a head wind. I sweated it out riding along the dead straight flat road for about seven kilometres and stopped, sat on a pile of logs surrounded by a swamp, and wrote a poem.

Stay tuned for chapter 2.d and learn a battle between Nazi soldiers and the Lithuanian Resistance Movement.

Are you confused as to what these numbers are [5]?, they are part of detailed glossary that will be included in the print and eBook version of this story.