After a comfortable night’s sleep dreaming with the murky sea’s lapping wavelets, we rose and breakfasted to the sound of wind in the trees. Our first stop was a massive 2kms down the road at the Sõrve Lighthouse. We cradled down right at the seashore in effort to avoid the howling wind, broke out the stove and and made our morning cup of coffee. Apparently the lighthouse is the tallest in the Baltic. For some strange reason most of it is painted black, one can only presume that they do not want it to be seen in the evening sky. We stopped, humoured the gaggle of hopeful souvenir-sellers, used the free toilets, cleaned our teeth and purchased a couple of postcards. 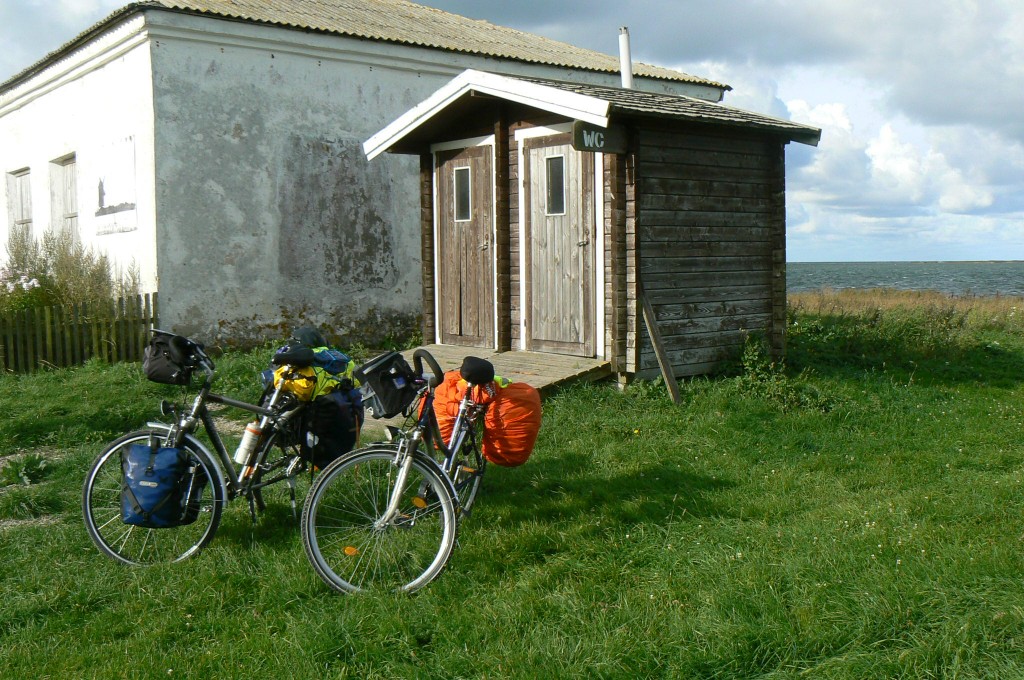 From here we tackled the wind in a northerly direction through yet more massacre sites, until we stumbled upon a beach near Ohessaare that was totally plastered with cairns. It was odd, kind of like a bus-load of drunk Scottish teenagers had stopped and did what rural drunk Scots seem to do, and built cairns. It was both oddly charming and quintessentially weird. 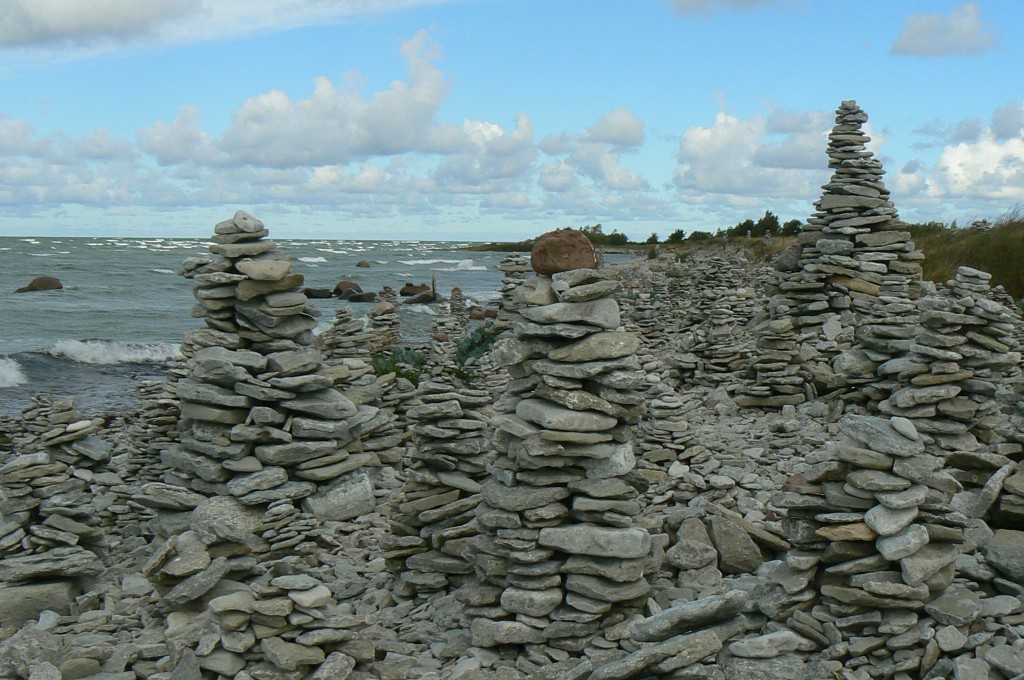 Our fellow guest and random film-maker had told us that in the village of Ohessaare there was a cafe with good coffee and cake. We followed the signs until we came to this delightful little windblown cafe snuggled up alongside a gorgeous little windmill. We sat out of the wind whiling down the time reading. We asked the lady who served us where she thought we should camp, she quickly got on the phone, resulting in the instructions of ‘ride to Karala; when you enter the village, on the left-hand side of the road is a large yellow house, the keys will be in the door, there is a room waiting for you upstairs’. We were thankful, however it was still 50kms up the road and a bit further than we had planned on cycling. As an afterthought, I asked where the next shop was the answer was, there was none. Oh dear, we needed water. 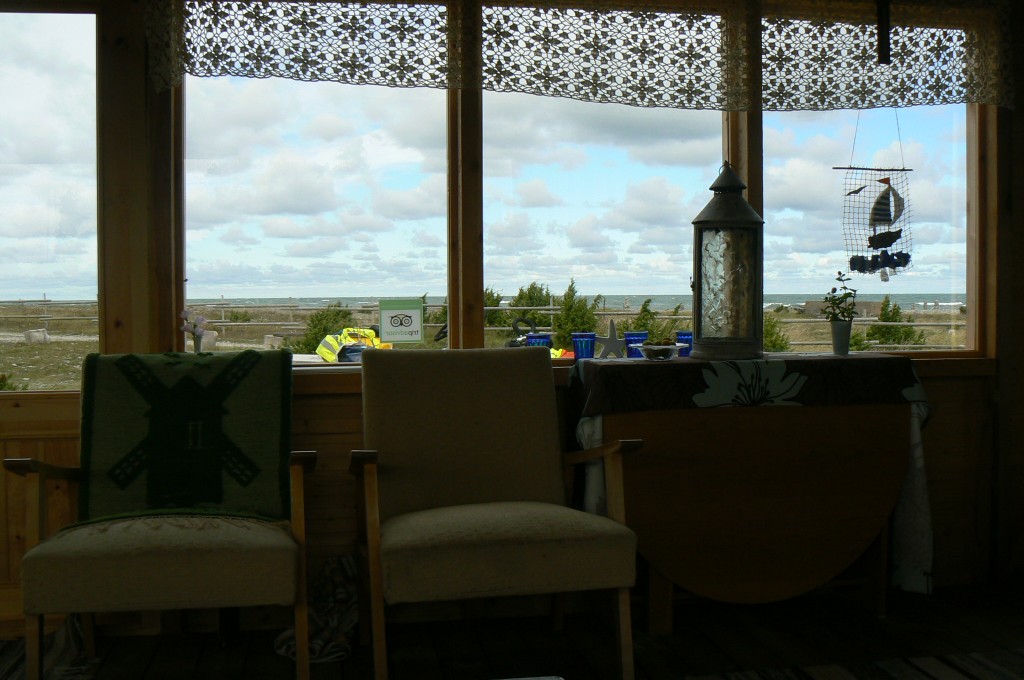 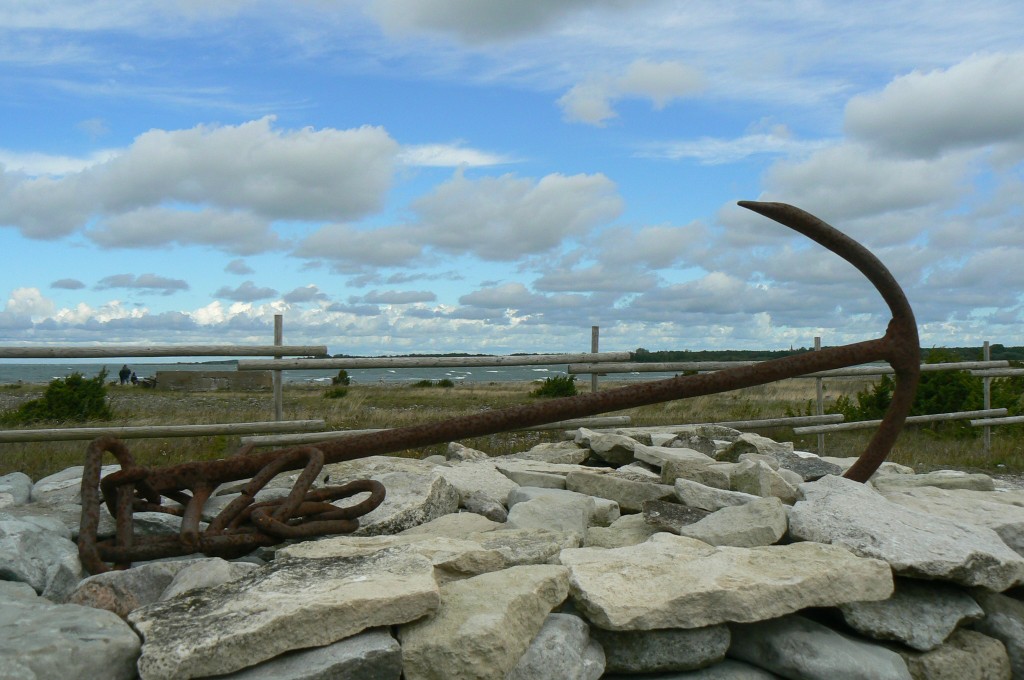 We kept cycling, battling the wind from all directions. The sky was cumulusly blue and grey, the landscape green and undulating and the birdsong delightfully refreshing. Then with no warning, just as we thought it not possible, the wind picked up battering us ferociously from the side. We hit damp gravel road and our stomachs decided to start wincing for food. We dowsed on, searching the blue lines on our map for non existent creeks. Worn and ragged, we spied an infant lighthouse and figured it was as good a spot as any to shelter from the wind and cook lunch. I gave the site a sorte and found a delightful looking and almost-clean puddle, it looked a perfect source for a cuppa tea. Billy boiled, tea-ed and fed, we set off past another battle site and Highland cattle. 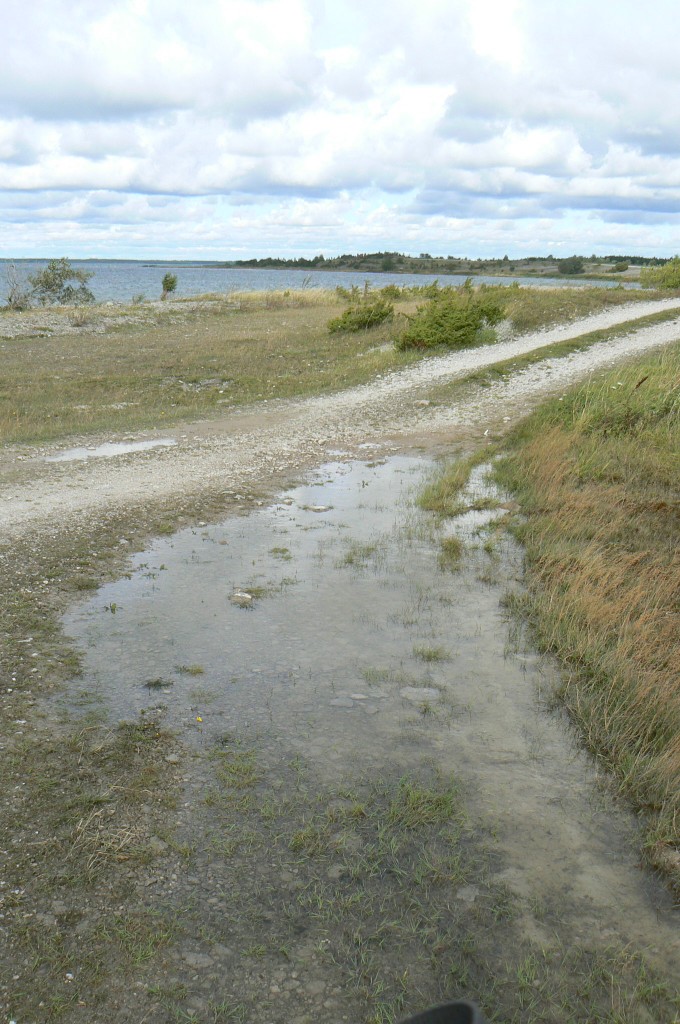 I had seen the westward turn coming on the map and I knew we would only have to ride about 3kms on in that direction. It meant turning head on into the energy-sapping wind. Sharon is goal-focused and performing anything less than her maximum is just heart-wrenching for her. I kept advising her to get into a low gear and to sit back, relax and enjoy the wind, but I am afraid watching birds fly backwards is just darn right demoralising. We managed to keep upright on the bikes until we turned north again, then there right on the corner was a soft grassy patch in front of a farmer’s gate shrouded in yummy blackberrys. A perfect stop for a rest and sip of rationed water. 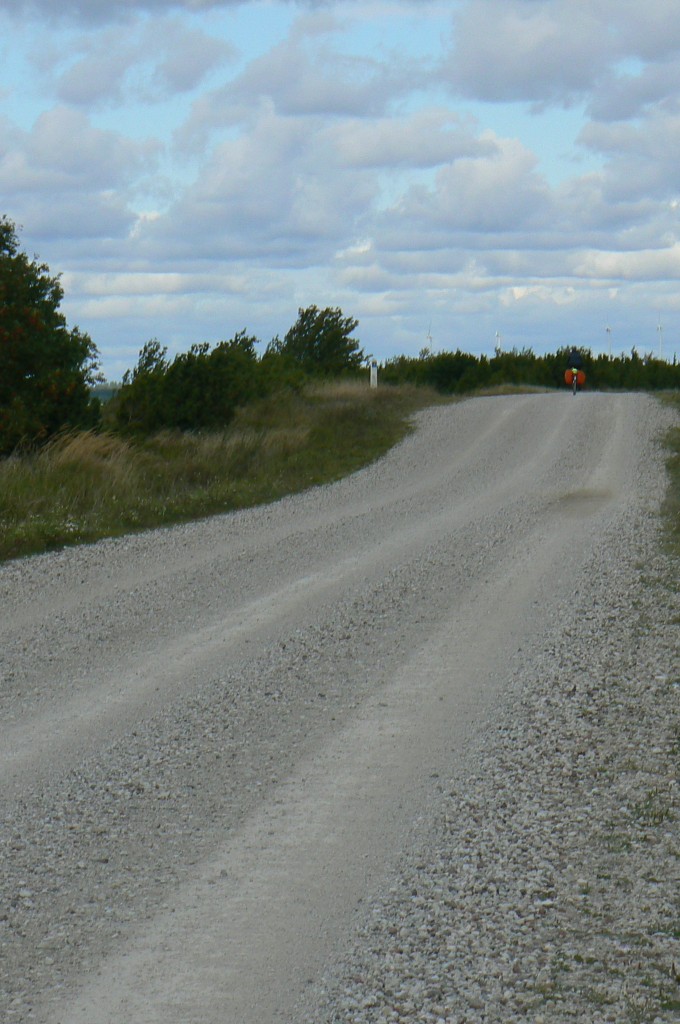 Dreaming of beautiful bus-stops and fresh springs, we pushed on to a predestined intersection. The plan was for Sharon to rest here and look after my faithful Ortlieb panniers, whilst I rode onto the shop at Lüdmanda. The crossroad bus-stop was a tired, exposed bench in front of a motocross track. There was nowhere for Sharon to shelter. I raced on, to discover that the shop and our chances of food, water and more importantly, beer, had closed about ten minutes before I got there. Bugger!

I cycled back to Sharon. We ate the last of yesterday’s bread, turned once again into the wind, onto a gravel road and cycled the remaining 7kms into Karala. Sure enough, as we entered the tiny pretty village, there was the large yellow community centre, with the key in the door. We called the lady from the cafe and thanked her, she let the caretaker know that we had arrived and the caretaker herself arrived shortly after. We had no language in common, but managed to communicate the essentials, leave a donation in the ceramic chicken and, yes, we were allowed to take a beer from the fridge.

We were a little tired, but all in all it was a good 72.84km day. We were much further on than we had expected and were looking forward to a much shorter day three.