It was a peaceful night’s sleep, however we still woke up kind of early. Our plan was to return to Oravice and bathe out our aches and pains in those lovely looking hot-pools. But first I wanted to return to Štrbské Pleso and get the photo we forgot to take. It turned out there were two possible routes around the mountain and Štrbské Pleso was right in the middle of them. So we opted for driving most of the previous week’s bike trip just to take that one photo.

We started with the switch-backs just up the road from our guest-house. Drove past the places where my gears were not working and the bus drove me off the road. It really was an up, around, up some more and then back the other way. My car GPS looked like it had been programmed by a totally drunk technician who just drew squiggly lines and circles across the screen. 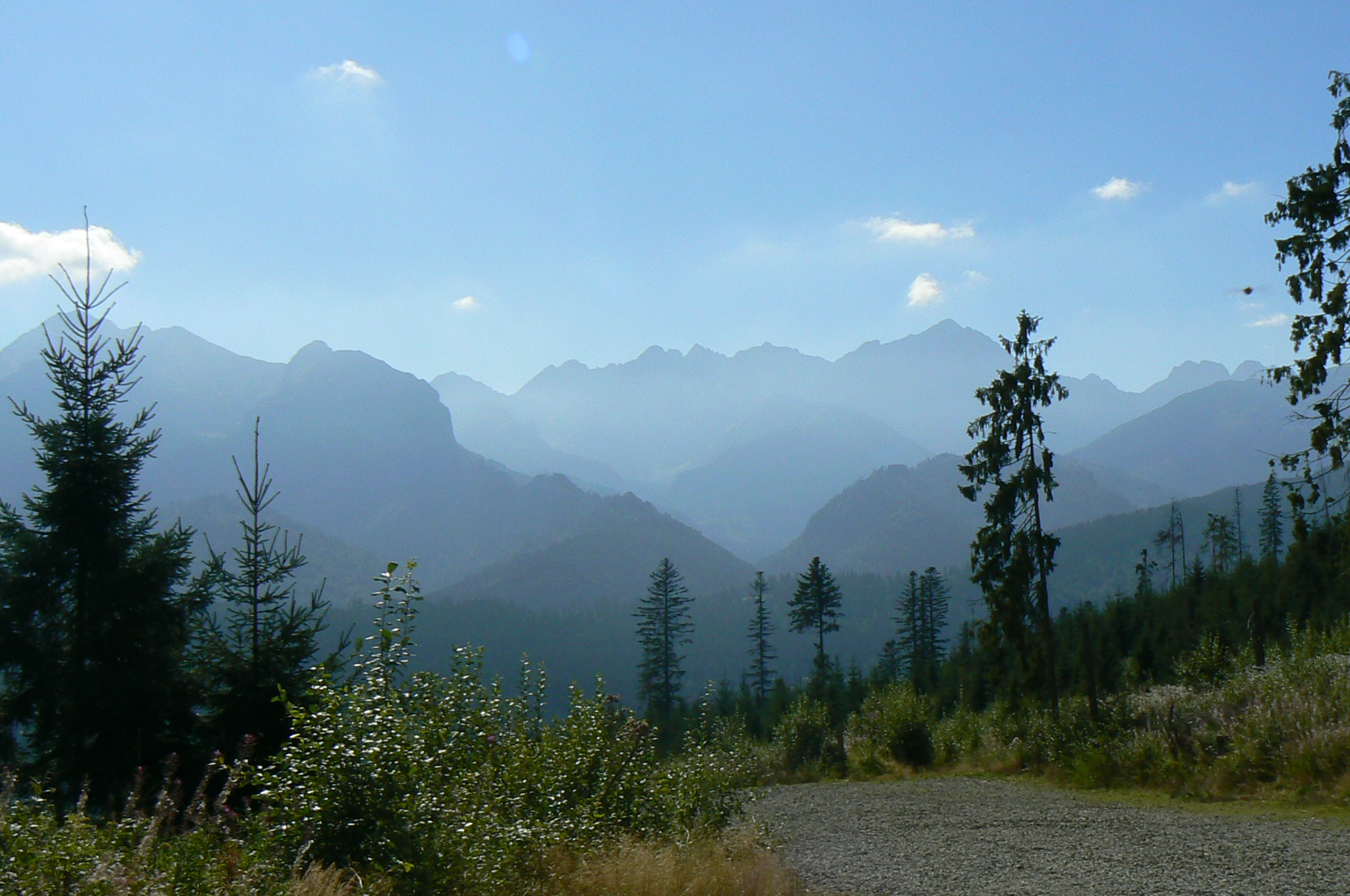 Then when we got to the spot where I found water in my sleeping bag we diverted from our cycle route and headed south down the 960 to the Slovak border. When planning this was a road I had considered riding along. I was glad we hadn’t as our detour via Červený Kláštor was much prettier and took us into countryside which we did not see anywhere else on the journey.

Eventually we turned west and back into the High Tatras. It really was one long slow climb, reluctantly we drove past J&T BANKA Café and their excellent Tonino Lamborghini coffee. The slow climb eventually stumbled upon the same random intersection that had previously confused me. We turned north and drove those couple of steep switch-backs. I have no idea why Sharon felt so good when we cycled this portion, I still look back at it as an ugly day’s cycling. 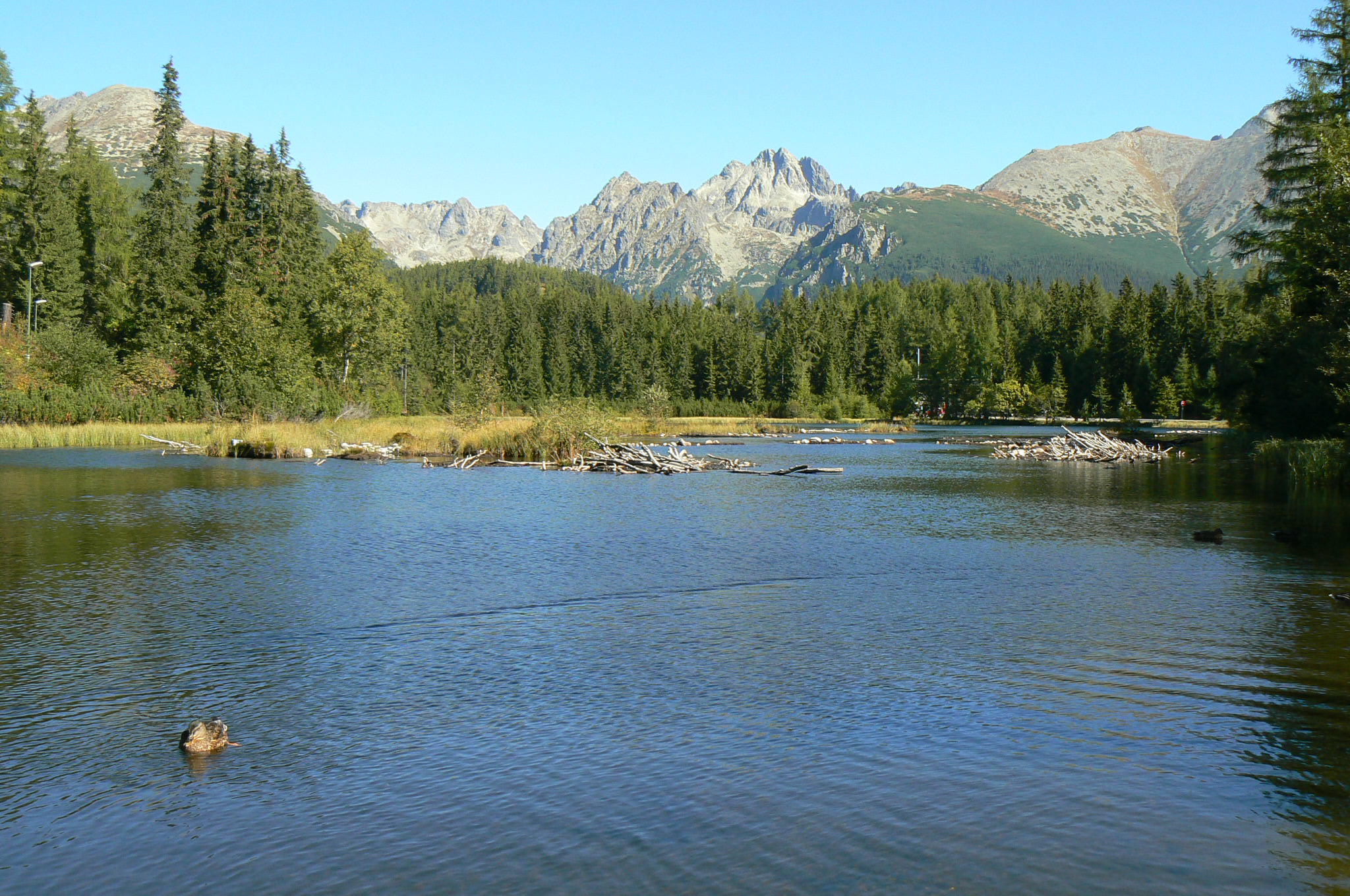 We stopped at our lunch stop, did not sit on the seats with the wet paint and took the forgotten photos of the lake. It really was worth returning for the photo. On the day I knew we could have ridden a couple more kilometres up the road and possibly see something much more beautiful, but my legs just did not have it in them. Now was our chance. After about five minutes of driving we stumbled upon a village infested with swarms of brightly clad tourists being held up by walking poles whilst they buzzed around innocuous souvenir stands. We did a quick u-turn and sped out of there before this horrific picture became etched in our memories.

It was a pleasant drive all the way downhill. Liptovský Hrádok and Liptovský Mikuláš proved to be just as horrible to drive through as they had been to cycle through, which is a shame, as they are both at the base of the mountains and could be lovely places if a little money was spent on their infrastructure.

The next thing on the adventure was the gloriously steep and long road up the mountain. Somehow we were not quite sure if our memories had recorded it correctly, surely we were not stupid enough to do what we thought we had done and climb that big nasty sucker on our pannier-laden bicycles. Just so there could be no future arguments we decided to video it. Oh my goodness when driving it and changing from third to second gear, we realised that cycling this mountain was indeed a totally insane thing to do. If you listen carefully to the video you can hear Sharon quietly trying to tell me to slow down. The mountain was high, steep and had lots of switch-backs. It was even scary in the car. It took a long time to climb and once again the GPS sucking onto my windscreen appeared totally drunk.

The car flew past our peppercorn-steaks at ‘Koliba Holica’ and down the hill. Zeberec was still just as sleepy and as cute as we had left it. We turned east out of town and headed to the hot-pools. 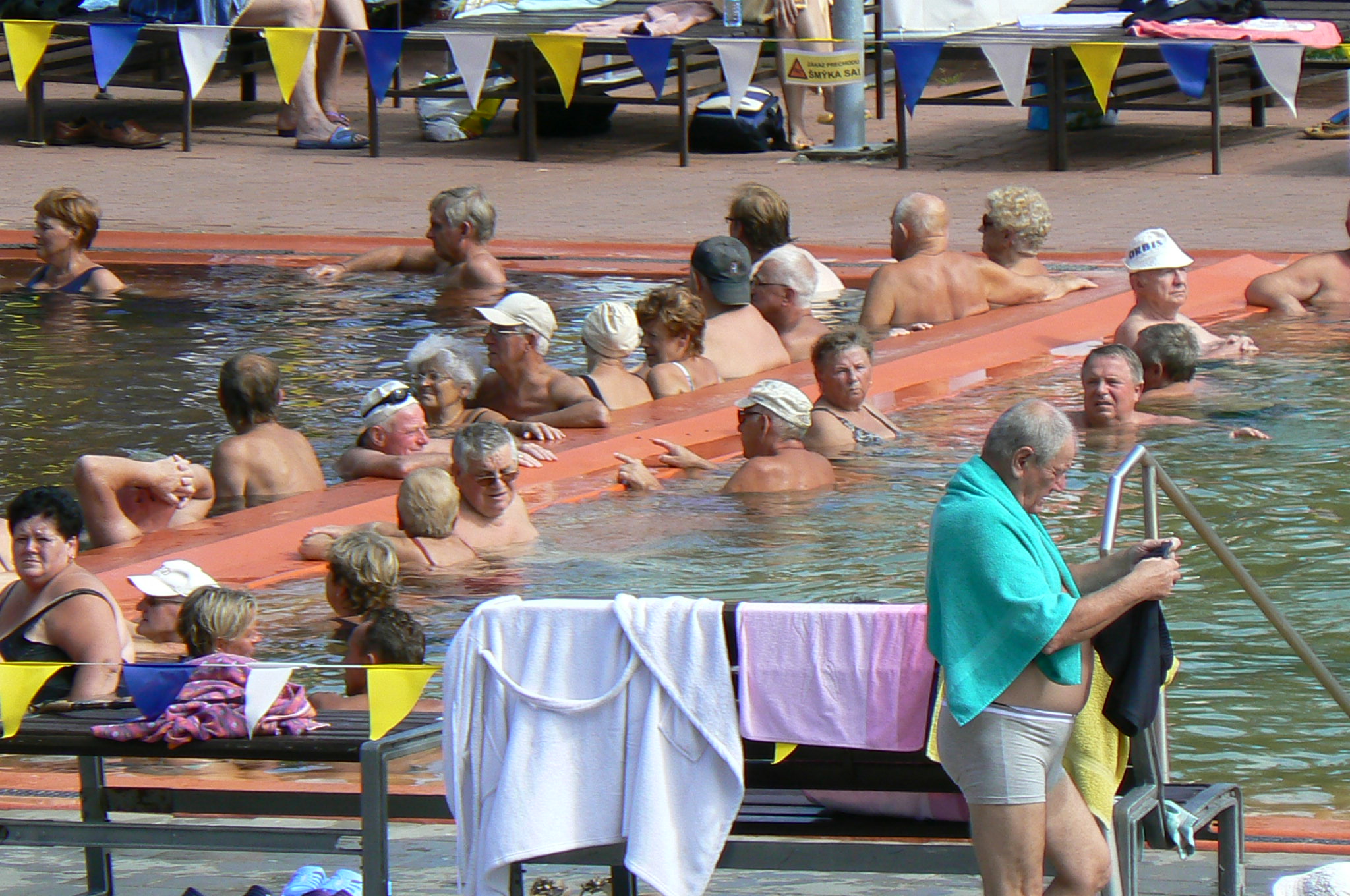 Driving into  Oravice one couldn’t help but notice the crowds. They were almost all entirely over sixty, overweight and under-clothed. Our quiet dip in mountain hot-pools had suddenly become a wet-squeeze at a senior citizens bathing suit party. The place was packed, it consisted of two pools, lots of sunbathing beds and was all nicely fenced in behind wire-netting. I cannot help but think that the fence was to stop overweight bikini-clad seniors from escaping and terrorising the town.

The changing rooms cost yet more money and we were almost out of Euro. A plan B needed to be found, fortunately there was an outside changing booth. It was made of plastic, started at knee-hight and could fit just one person. It did just fine. I was first in the water and could immediately feel all those aching muscles. I could also feel some other stuff, there were bucket-loads of dry skin floating through the pool and great big globs of slime, it seemed to be a mixture of body-fat, dirt, hair and dry skin. I can only describe it as gross. However having a long history with hot-pools I was determined to enjoy these. I found a spot where I could focus on the mountains, and sat there, let my leg muscles literally unwind whilst my arms were kept busy creating small waves as I chased away slimy globs of people grease. The experience was truly relaxing, hilarious and terrifying.

Afterwards we walked to a small outdoor restaurant to buy lunch. Of course we couldn’t read Slovak so were forced to buy from looking at pictures hanging on the outside of the caravan-kitchen. I pointed to a picture with a big plate of different kinds of Slovakian sausages. What I got was one nice little sausage, it tasted good, but I was disappointed.

Carrying a bag full of stories we drove out of town. Before long we stumbled upon a couple of rather desperate looking hitch-hikers. Our Polish was almost non-existent and their English though considerably better was not that good. As best as we could work out they had got lost in the Polish mountains and somehow ended up quite far away in Slovakia, they didn’t seem to have any gear with them other than a small water bottle and some chocolate. Their phone did not have roaming so was not working. They asked me to take them to the next town, after a little conversation we drove them back into Poland and dropped them off at a random bus stop where they had agreed by phone to meet their sister. It was all a bit funny.

After the sausage debacle I was keen to try buy some of the smoked cheese we had spotted the day before and I new just the place to buy it. We pulled off the busy main road into a very narrow and short gravel driveway. In front of us stood a tiny windowless smoking log-cabin. I walked on in like a native Pol. In the middle of the floor was a fire-pit supporting a small smoking fire, to the right was an old grubby bed covered with a grubbier blanket and against the back wall was a collection of old wooden chests. No-one was in there, so following the sound of banging I wandered outside to find an even grubbier old man chopping firewood. I looked at him, opened my mouth and realised that I had no idea what the Polish word for cheese was. So in English I said ‘cheese’. He didn’t say a word and scurried away inside, I followed. He walked to the back of the hut to an old oily wooden chest, stuck his grubby fingers in there and pulled out an egg-shaped block of, you-guessed-it, grubby cheese. He opened up another chest that I was sure was full of old tools, grabbed a well used plastic bag and shoved the cheese in it. I handed him five złot, he shook his head ‘no’ and grunted what I presume was an amount. I opened my wallet, and pulled out a few notes, he went straight to the biggest note and took it. The guy didn’t strike me as that clever, however when he saw one, he was sure as hang intelligent enough to recognise and take advantage of an incredibly stupid foreigner.

The first thing I did upon returning to the guest-house was wash the cheese and throw out its smelly old bag. I waited until just the right moment, sliced the cheese and ate some. Oh gosh what a taste. It could be best described as the taste of oyster shells that had been harvested from an oil-field and then burnt to charcoal with household rubbish. The cheese was mildly gross, oily and incredibly salty. I was royally ripped off, by a clever grubby old man.

Oh well such are the adventures of travel. We pulled back out onto the road and allowed ourselves to be swept up in the throngs of Zakopane bound traffic.