The journey to Lübeck was a very pleasant and peaceful affair. We had ten minutes to exit the train, find elevators, find the next platforms and embark. First problem: we were hampered with being two of about six cyclists all frantically trying to use the disability access elevator. The elevator only carried one bicycle per trip. Second problem: there were three huge stairs on to the cycling carriage. We did not have time to take our panniers off and with Sharon on one end and me on the other, were forced to manhandle our bikes on to the train. In the middle of this manoeuvre I lost my footing and fell between the train and the platform. In itself a minor slightly-annoying issue, however what bothered me was the sound of my new chain-guard cracking and snapping as it failed to hold the weight of my bike bouncing down the stairs. New bikes have to break sometime why not on an old German train?

Fifty minutes later we lumbered our bikes off the train at Bad Kleinen and could not find wheelchair access to the platforms. We ended up dragging our fully-laden bikes down a flight of stairs and up another. It was on the up section that I heard broken glass; I just presumed I had kicked a beer bottle or something. Wrong. What I had heard was the sound of my expensive sunglasses breaking. Everyone had told me that German trains were set up for cycling. Wrong, very very wrong. At least the train to Rostock had simple cycle access. Sitting on this train silently sulking, I was confronted by a particularly officious conductor. He charged us an extra 5€ each for our bikes. I was sure I had read on the Deutsche Bahn website that they did not charge for bicycles. Grrrr. 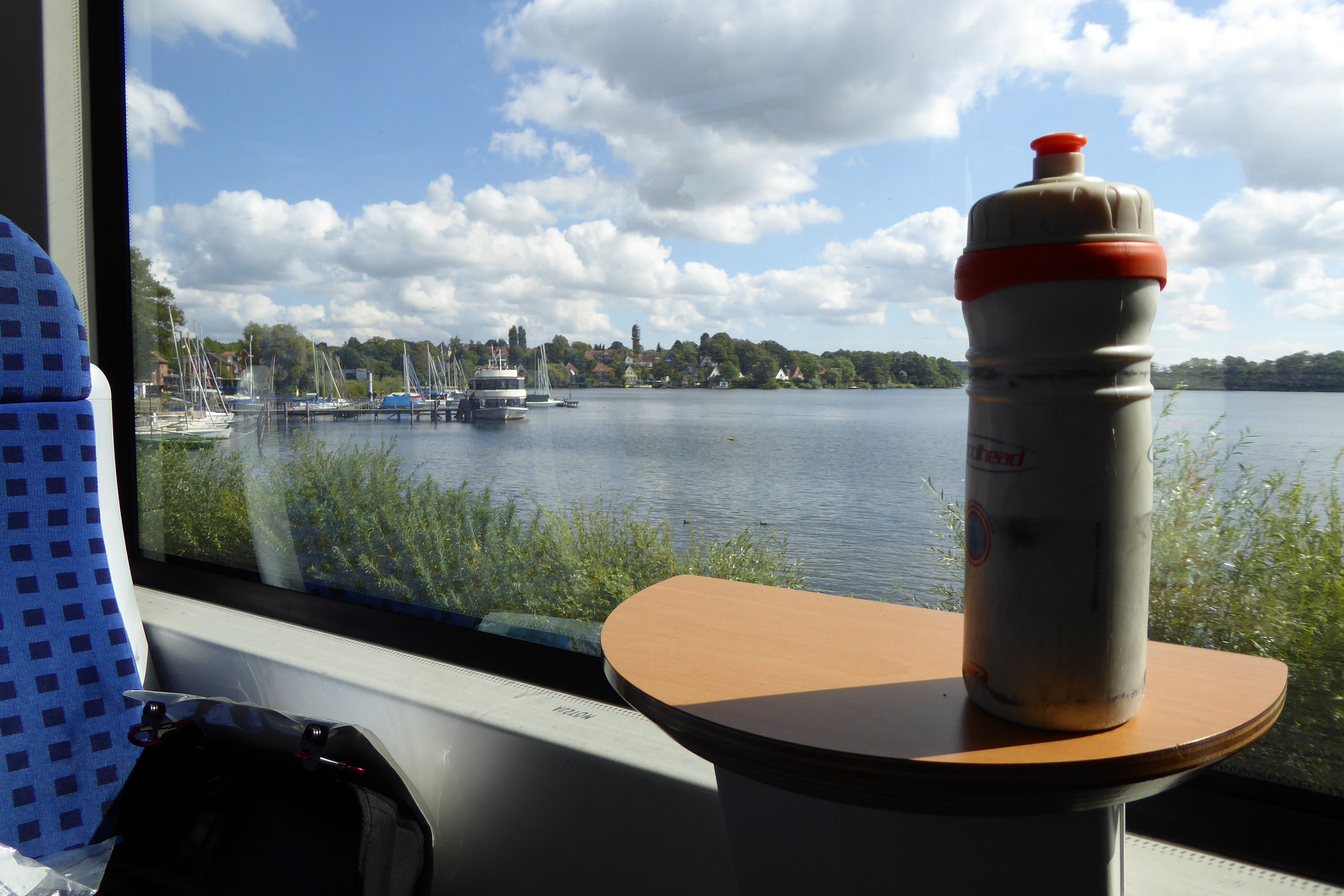 We had a very simple change of trains at Rostock and a quick and beautifully boring journey to Altefähr Station. The station was deserted and looked like a scene from a bad spaghetti western. We jumped on our bikes and started cycling towards the exit. My front wheel immediately locked up. I spent the next ten minutes on the platform with my bike upside-down fixing all the damage that had been caused on German Rail. At least the ordeal was over.

We could not find the disability exit; we had walked all through this particularly grubby station and not found a single sign. We ended up wheeling our bikes across the tracks on to a gravel car-park and then down a steep-grassy-scrubby bank. On the way down, my front wheel hit a pothole and twisted my handlebars around. My brand new bike was taking a beating, but at least we were on Rügen Island and all we had left to do for the next week was follow beautifully sign-posted and paved cycle tracks. 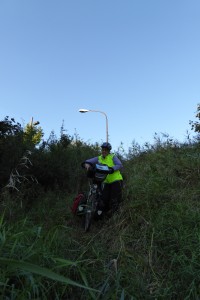 Standing straddled over my bike in front of the station, I could see neither cycle path nor signposts. Back in Kiel, Sharon and I had miss-communicated, resulting in us not actually having supper on board. We were trying to decide should we ride west into Altefähr, find a supermarket, spend a night at the camping ground there and then double back past the station in the morning. Or should we ride east, free camp and eat our emergency rations. We decided to head to Altefähr. After cycling all of ten metres we were confronted my a busy road. We crossed it and simply could not find any signs pointing the way. Because everyone, absolutely everyone, had told me how well signposted Germany is, I had not bothered to find detailed maps. We turned around and headed back towards the station. At the station we ardently searched for signs or cycle paths. It seemed logical to just follow the road east, but my maps seemed to suggest that we needed to be closer to the water. It was about this time that I spotted a sign and a couple of dirt tracks heading into a rather large ditch. After an initial unnecessary foray into the ditch, it became clear to us that this was the cycle path we had been searching for.

Hallelujah we were on the map. Light was fading and we were hungry, so immediately we started looking for a place to camp. We found a lovely, somewhat exposed possible pitch overlooking the Kubitzer Bodden and the Rügendamm bridge. After studying the map and noticing a possible restaurant ahead we decided to ride a little further. What we found was an old, slightly rundown red brick Prussian-looking two storied building. It had outdoor seating, a place in eyeshot to park our bikes and a view of Kubitzer Lagoon.

We took a seat and even managed to find cushions and blankets to put over our knees. It was September, so things were cooling down in the evenings. Eventually a little old lady shuffled out, fussed over the other patrons and handed us menus. Of course everything was in German, but this was not a problem for my very smart wife, so we ordered fish and chips. Halfway through our meal, the guests beside us finished their 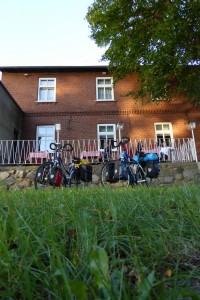 meal, walked down to the bodden and sailed off into the night. It was somewhere around this time that we decided to camp on the lovely soft looking mown grass right in front of the rustic restaurant. We lingered as long as we could, then wheeled our bikes about twenty metres around the corner and right on the water’s edge, pitched our tent and fell to sleep to the peaceful sounds of water lapping up the shore and trains thundering over the bridge.

It was a long day, sometimes comically disastrous, but finished on the map with a good feed and comfy bed. Between ferries, trains and the restaurant, we managed to push and cycle a staggering 9.49km.