I had forgotten to change my watch from EET to CET time-zone, consequently I am not sure what time we left in the morning. I do remember that the grass was dewy, the air was cool and that the mountains were poking holes in the sky. 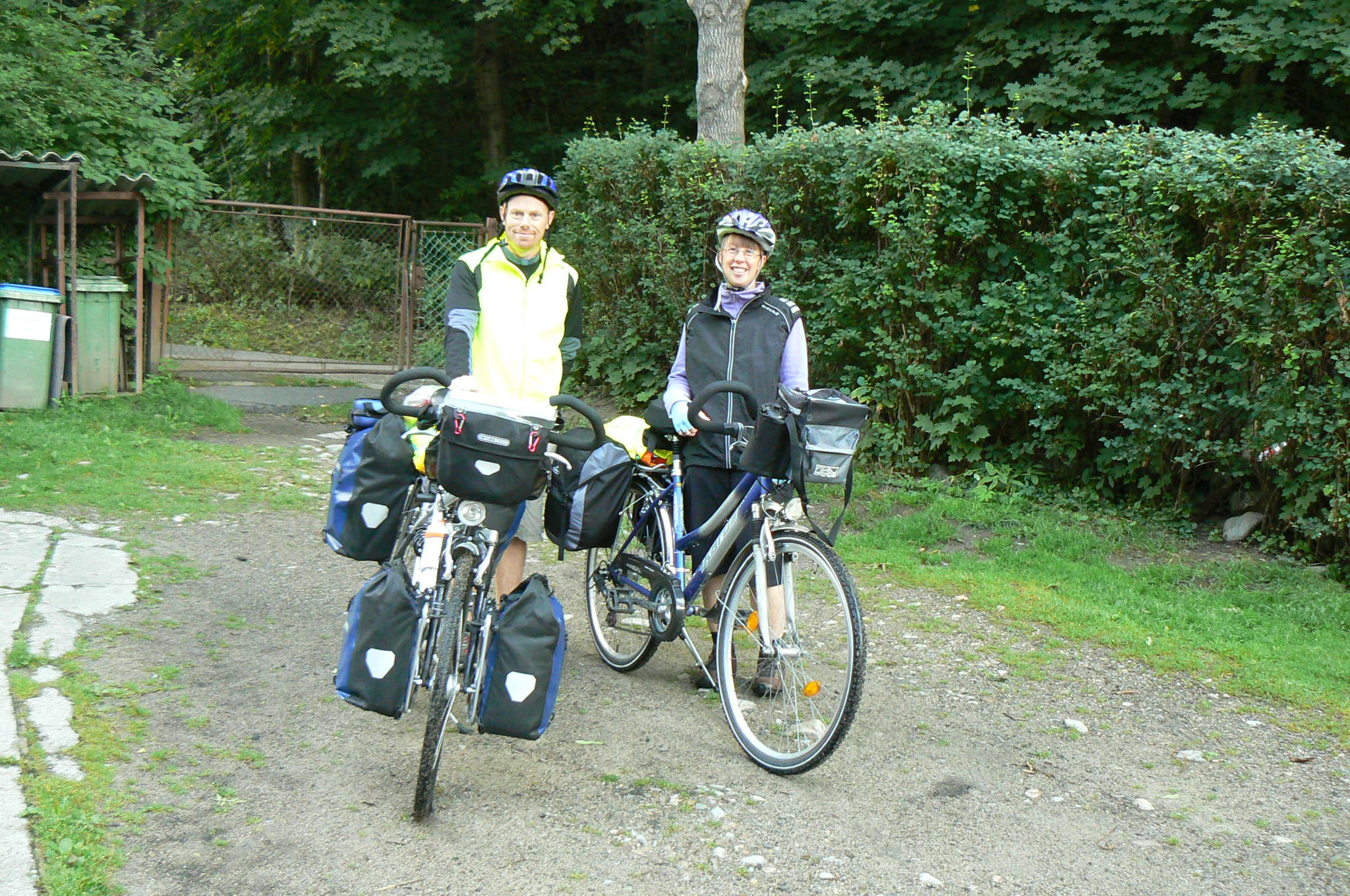 Wrapped up and heavy with food and water we edged our way through the gate of our Zakopane guest-house and along a pedestrian lane. Two things immediately hit me; my bike was really heavy and I had no low gears.

Within about thirty metres we had started our first uphill, it was not much of an uphill, but I had to somewhat precariously stand and pump my peddles just to keep the bike upright and in forward motion. This was not looking good.

Within a few kilometres we were negotiating steep switchbacks amid a tirade of cars, vans and buses. I was wobbling and struggling. I had worked out that I could peddle downhill in my top gear and if I was lucky whack the bike successfully into the first of my seven internal gears. This worked around fifty percent of the time.

On one of the early switchback corners I was overtaken by a bus that did not seem to notice how wide my pannier-flanked bike was. He cut in on me and sent me flying into the ditch. My wife and co-pilot cycling behind me said that if I had kept my nerve, the bus probably would have missed me. This gave me no comfort. 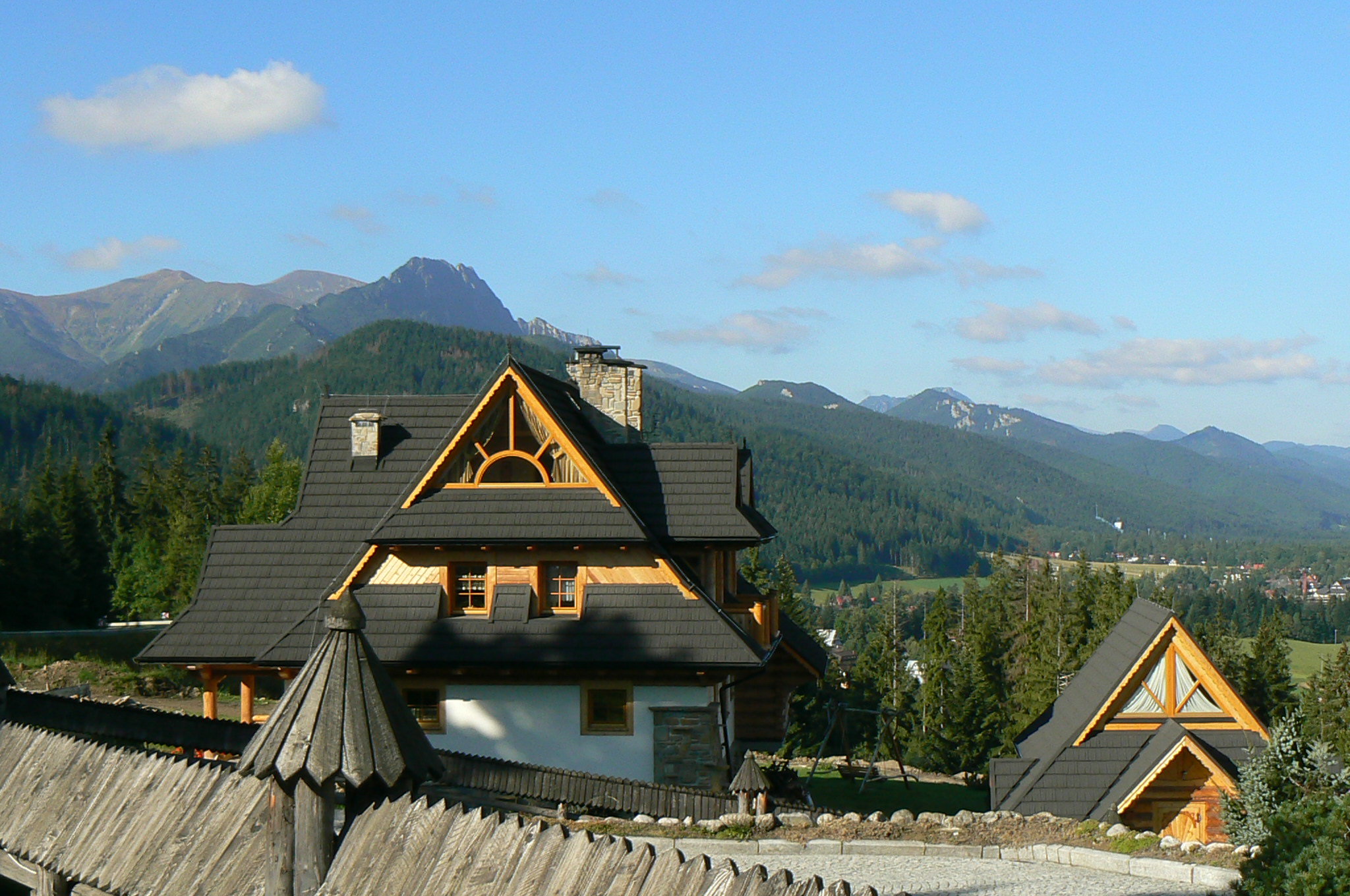 I was quite relieved when we eventually surfaced into the sunshine at the top of the hill. We rode predominantly uphill along a mountain ridge, past delicate large wooden houses, in and out of pine trees and sunshine. It was cool and beautiful with the refreshing scent of morning mountain mist. 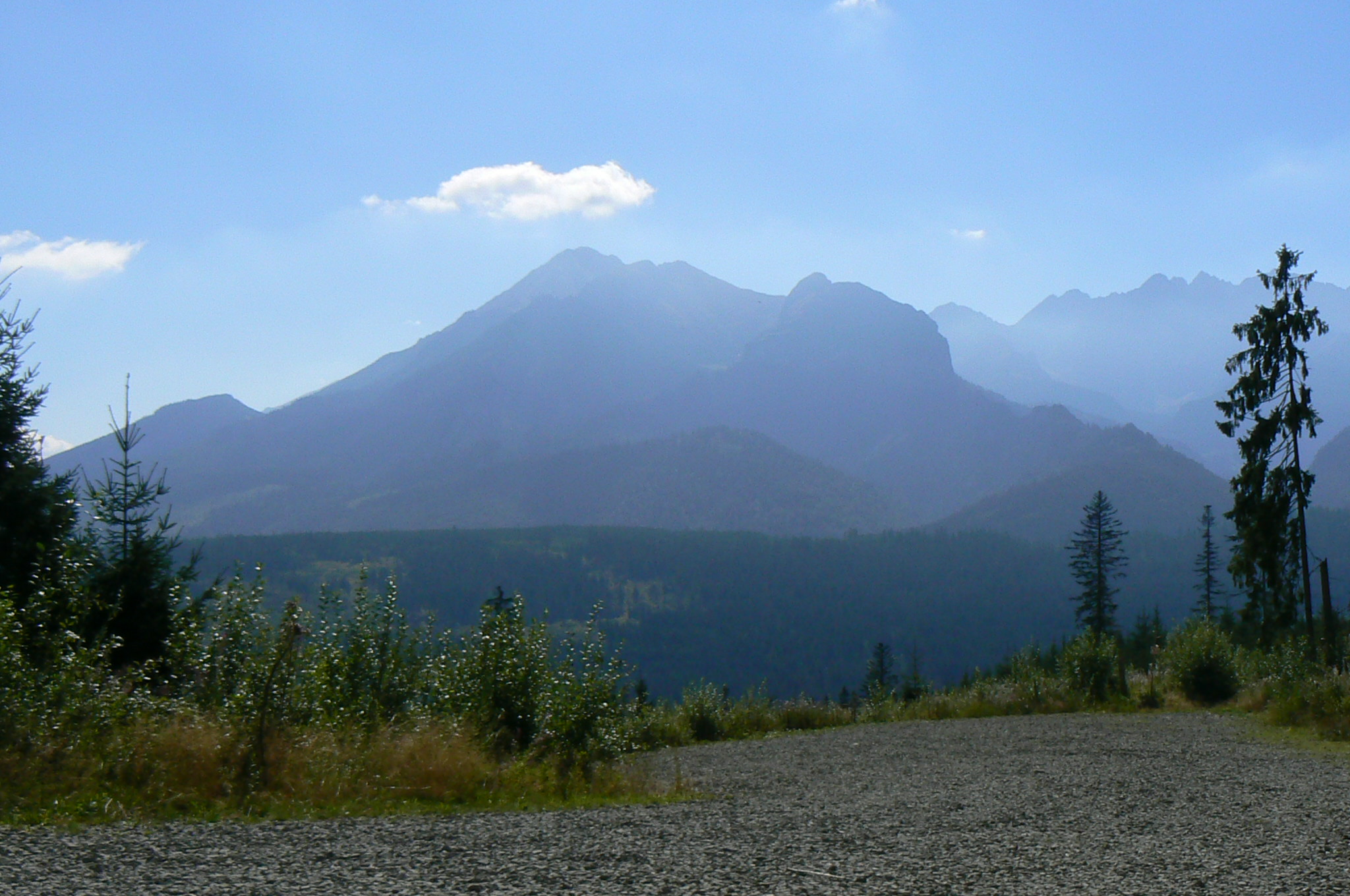 We stopped near the top to rest a little and take photos. It was here I noticed that a water bottle had leaked in my pannier. The result was a wet sleeping bag, inner-sheet and pyjamas. I was miffed but not daunted and simply attached my pyjamas and inner sheet to the outside of our bikes to allow the wind to dry them.

I could not find topographical maps for this journey, so with no warning the hill finished and we were sailing down hill. I was zooming through tourist villages, past hotels and houses, getting slightly annoyed by the cars following me without overtaking. It was not until I got to the bottom of the hill that I understood why they were not overtaking me – I was doing forty-five kph in a forty zone and was simply faster than they were.

Co-pilot Sharon has a lot more common-sense than I do and descends well within the speed-limit, by the time she caught up with me at the bottom of the hill, I had strung a clothes line over a street sign and had my wet pyjamas drying in the soft noon sun. We rested awhile, exchanged descending stories, snacked and pushed on to the only part of our journey that I could not see on ‘Google Street View’. I feared gravel road and could not see any pass through the hills ahead.

We quietly chatted and cycled along a sparkling river, past some homes, a shop, took a wrong turn and corrected ourselves, before stumbling upon a sign which portrayed that the road ahead was going to be steep. We had just gone up and down a mountain and without seeing signs that said ‘steep’; I was still without low gears and justifiably a tad concerned with what lay ahead. The climb was through a residential area and perhaps about six-hundred metres in total, but it was the steepest, nastiest little climb we were to encounter. Even with low gears, there would have been no chance of climbing it. It was so steep that the locals were watching rather bemusedly as I struggled to push my bike up.

We had agreed to have lunch at the top, but couldn’t find a place to stop which provided a suitable spot to erect our clothesline. Also we had realised we had forgotten to bring the required bell-pepper, cheese and grater for our burrito meal. We found a quiet village shop before descending upon a farmer’s paddock and a peaceful place for lunch.

After lunch we were still perplexed about these low gears, had even prayed that they would somehow be restored. We jumped back on our bikes to finish our slow descent, when without warning my handlebars locked up, I had no control of where my bike was heading. In fighting for control I noticed a cable-tie snapping, eventually I managed to stop and carry my bike off the quiet road. I soon discovered that my gear-cable was taunt under my new front pannier and had succeeded in lodging itself under my front light thus locking my steering. I took off the pannier, attached a new cable-tie, re-routed the gear-cable away from the pannier and delightfully discovered that now my four low gears were back. The cost was a near accident, a factory made cable-tie and blown front and rear lights. I was very thankful to have my low gears back. 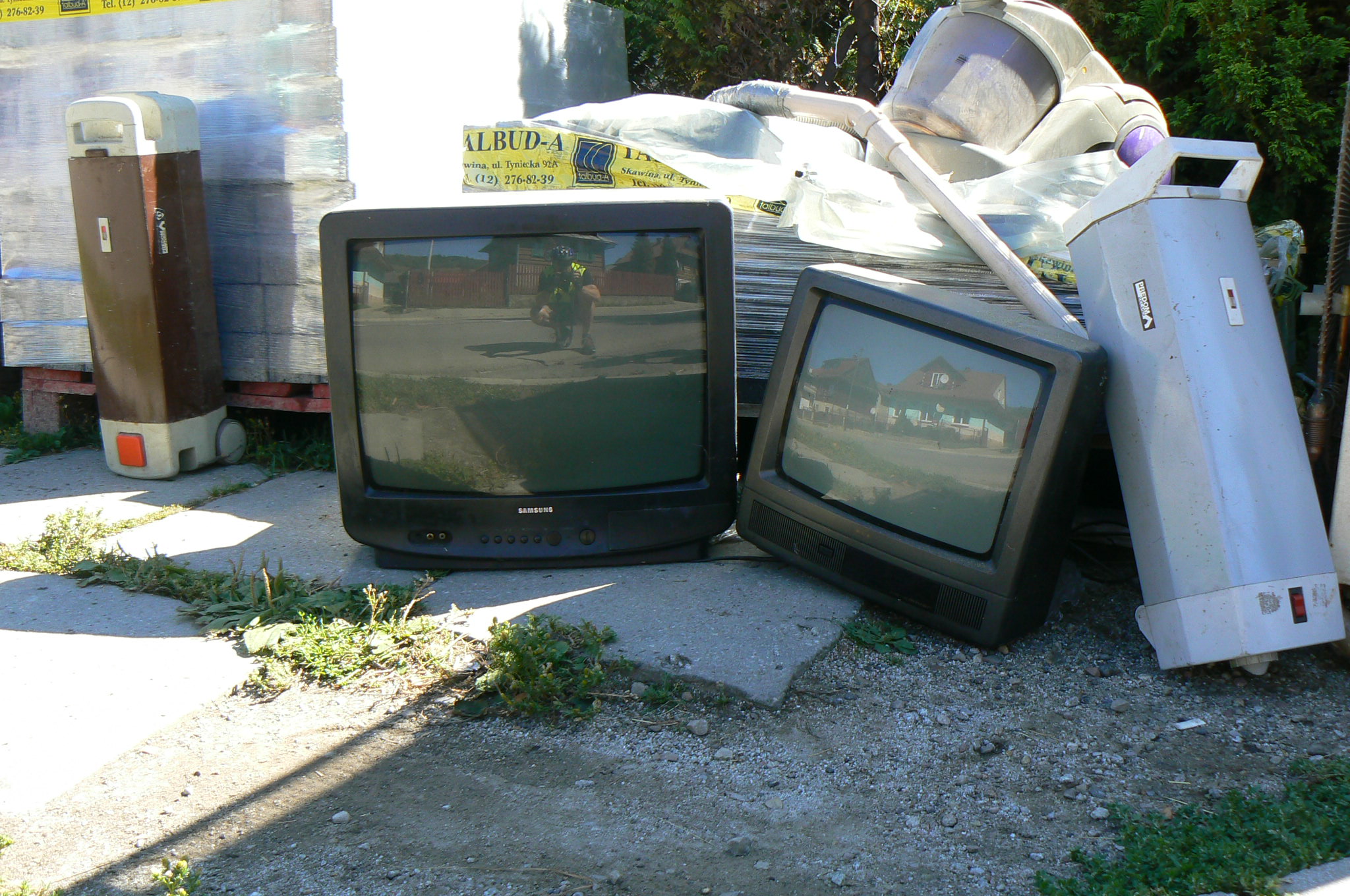 The next fifteen or so kilometres were over delightful undulating pastoral-land splatted with unspoilt villages. I really, really enjoyed this section: everything was so picture-postcard perfect, with one notable exception. I presume Poland had recently switched from analogue to digital television and today this Wednesday was the recycling day; almost every second house in the villages had a collection of dead teles posted at their front gates. It was a little surreal.

We were way off the tourist track in the village of Niedzica, when a car reversed out of a shop car park directly into Sharon’s path, fortunately she was quick enough to swerve onto the wrong side of the road, avoiding a collision with the oblivious driver. I think this might have scared Sharon a little, I was riding along a flat stretch at thirty-four kph when she quietly snuck up behind me and said ‘I am here, you can go faster now’. Thirty-four kph with six panniers, I do not get any faster, we stopped at a quiet petrol-station and sweated it out in the afternoon sun whilst downing a Pepsi.

Shortly after that village we bumped into a lake, dam and cycle path. Cycle paths away from the road and traffic are always so, so beautiful; this one took us all the way to the Slovakian border. 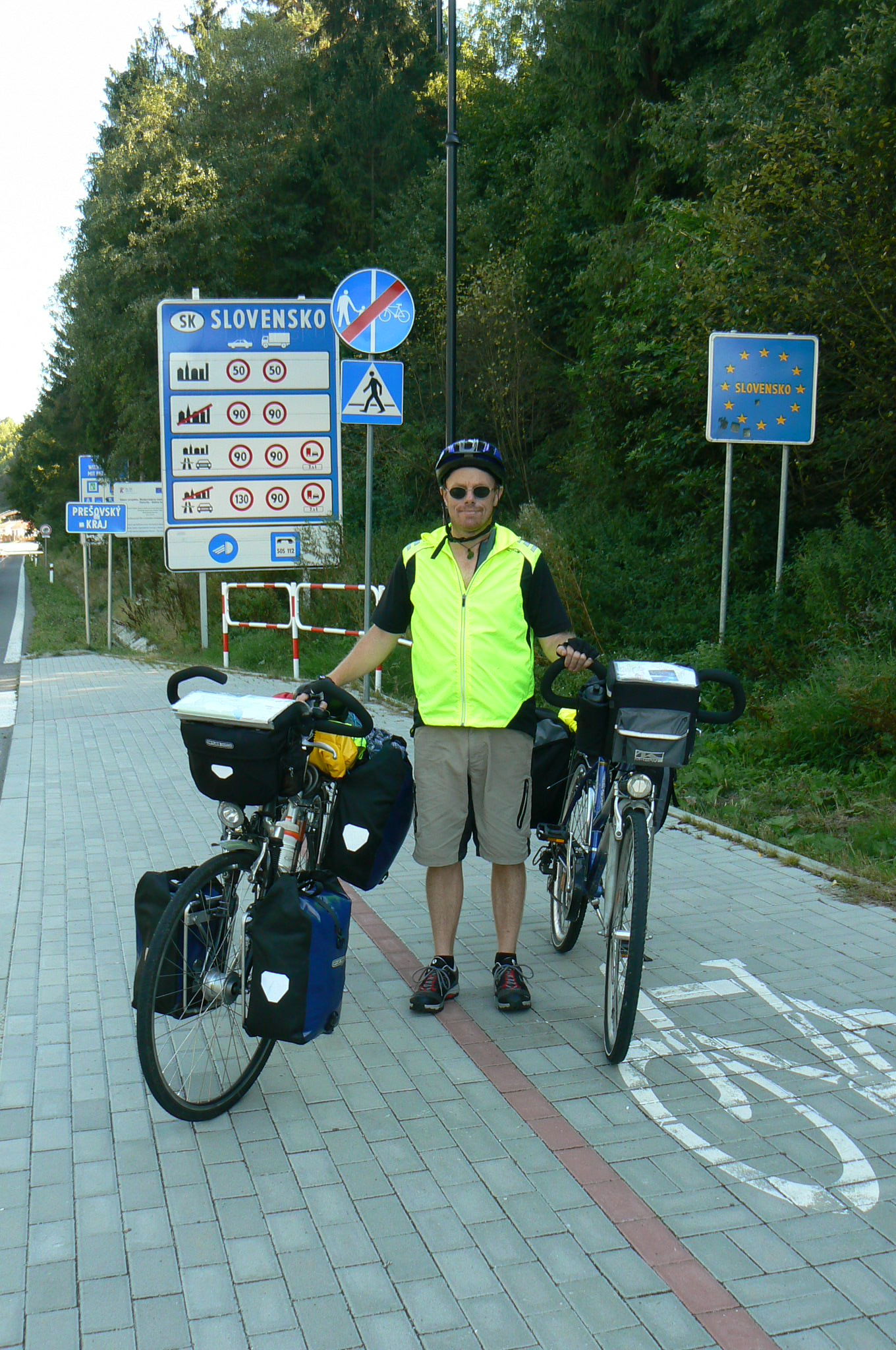 The final six or so kilometres were spent cycling along the Dunajec river and over a single short sharp first gear climb. We arrived at Červený Kláštor amid gentle sunlight showering us from soft blue cloudless skies. ‘Camping Dunajec‘ proved to be by far the best camping ground of our journey. It was very clean, well equipped with friendly staff and had a restaurant that served excellent food and Radler. Radler being a Slovakian beer with lemon juice in it. 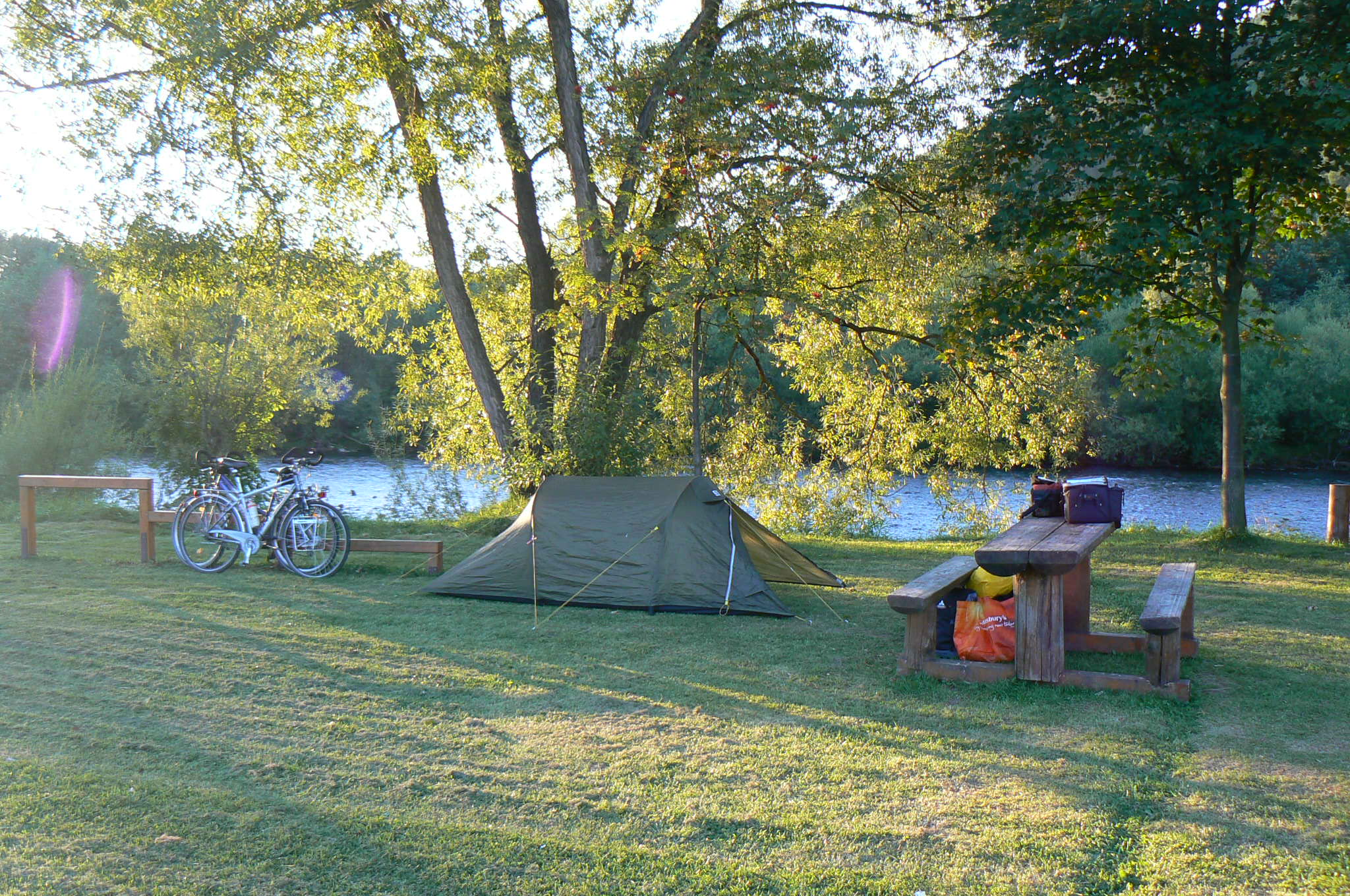 First thing up was our clothesline. The end-of-day sun was perfect for airing my damp sleeping bag. We pitched our tent beside a burbling river, took a sunset walk through the village and finished the evening with a camp fire.

The day had a few challenges, but was a good day.