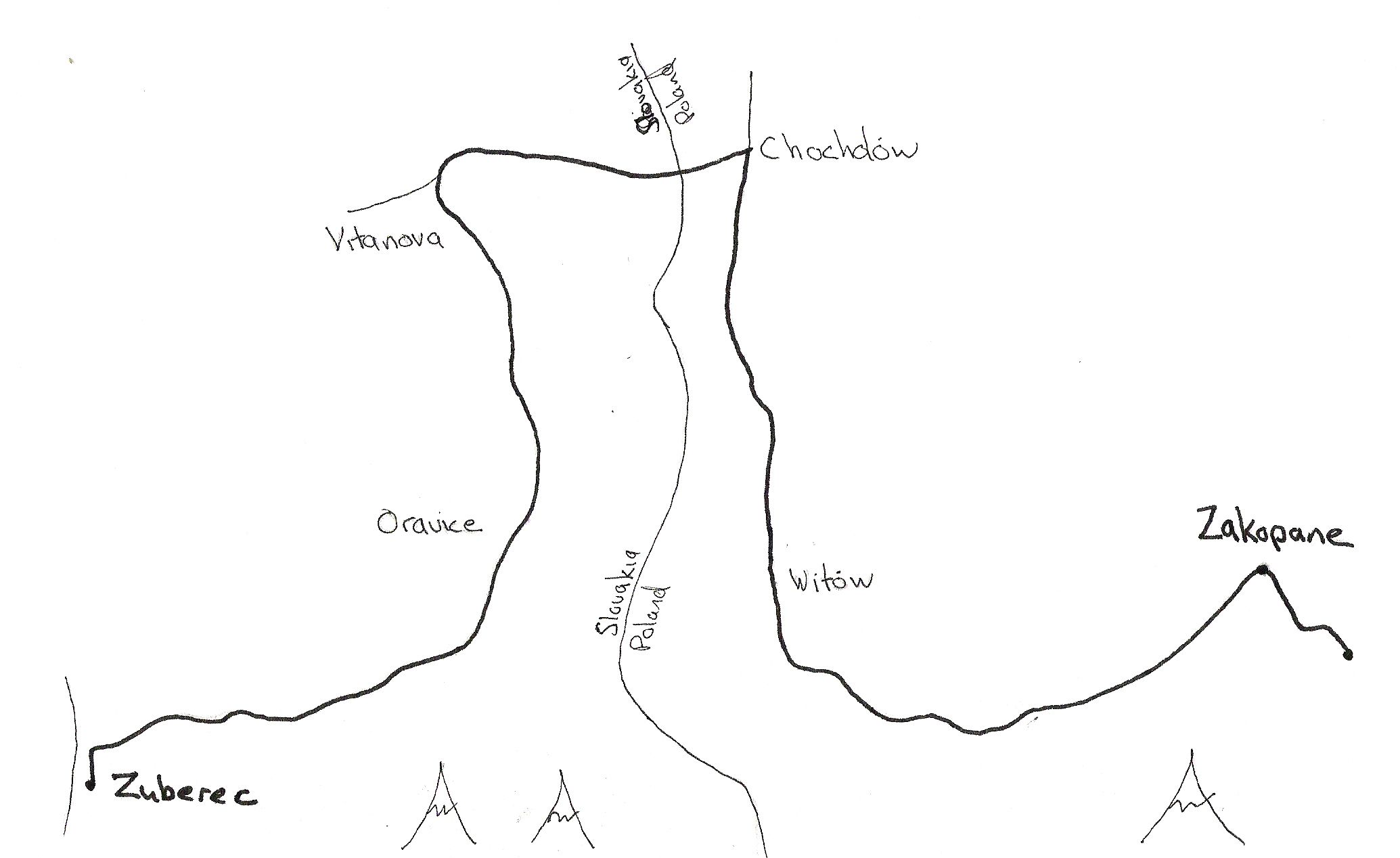 Again there was not a hurry to rise on this our final day of our trip. The penzión only had net curtains and we were woken early by subtle European sun shining radiantly through our window. Nothing else to do really but saddle-up.

It was so so nice to not have to pack our tent, sleeping bags and Therm-a-rests away, we were on the road in under half the time it usually took us.

I was pretty sure that this day was going to be a slow gradual climb all the way back to Zakopane. Immediately we started ascending. The mountains were again on our right, but this time they were casting long shadows towards us. The morning was a wee bit chilly as we cycled in-between a river and pastoral land. 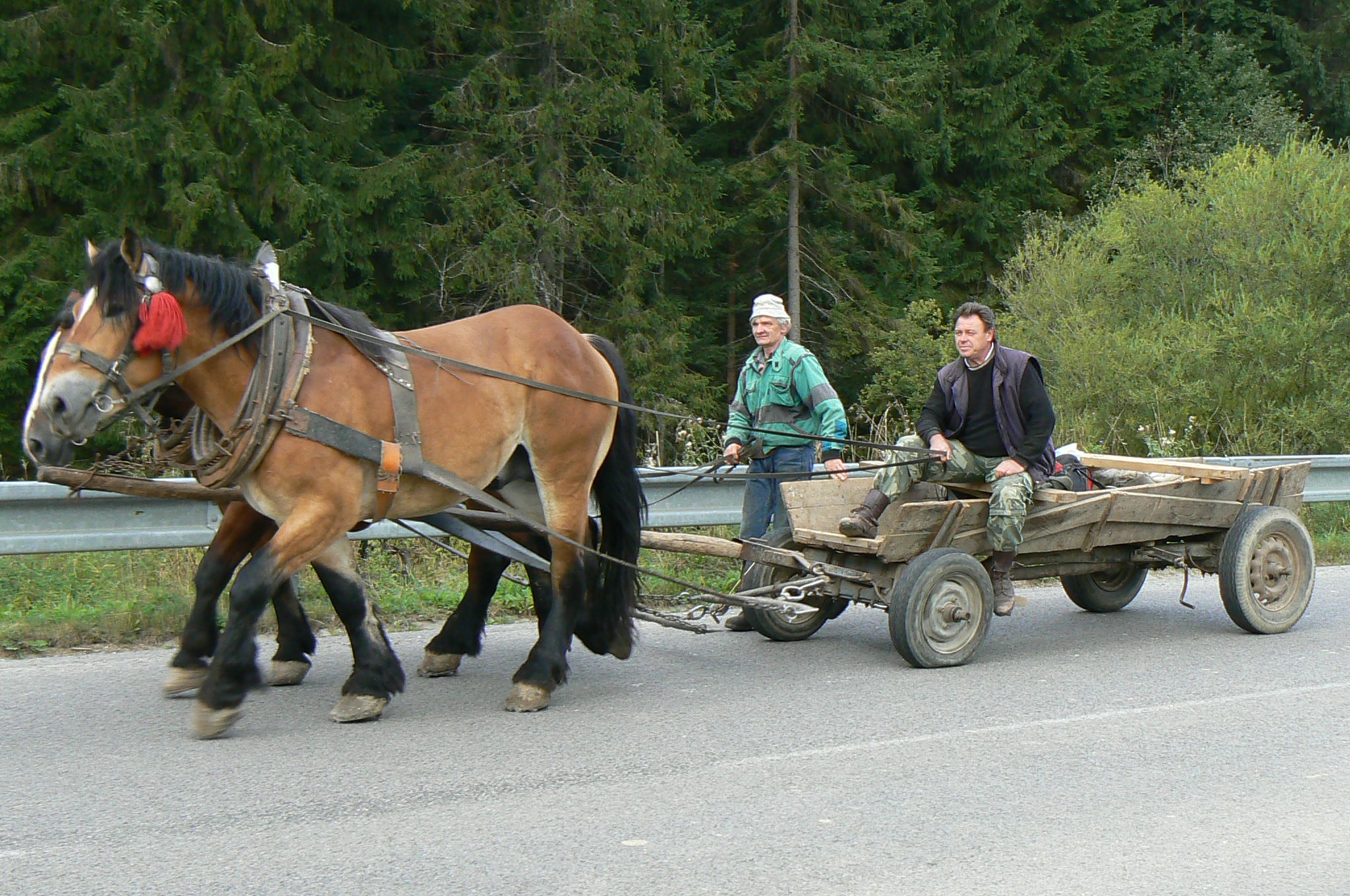 Even though the road undulated upwards we managed to overtake a dray being pulled by two horses. It is always a special moment overtaking a horse and cart and this was Sharon’s first. I have learnt that horses and their often drunk drivers know to listen for cars and trucks, however a quiet bicycle can often spook them both. So while still quite a distance behind I tinkled my bell and said dobrý deň. Slowly and quietly the two drivers turned around, almost smiled and gave me a peaceful nod as I sailed by.

Very soon the undulations turned into a climb and in some cases quite steep. We disappeared into a forest alongside more mountain streams and felt the temperature drop dramatically. I was very thankful for my sleeves and wind-proof gilet. Without any warning we summitted and dropped rather quickly out of the forest into the small slightly odd thermal pool village of Oravice. 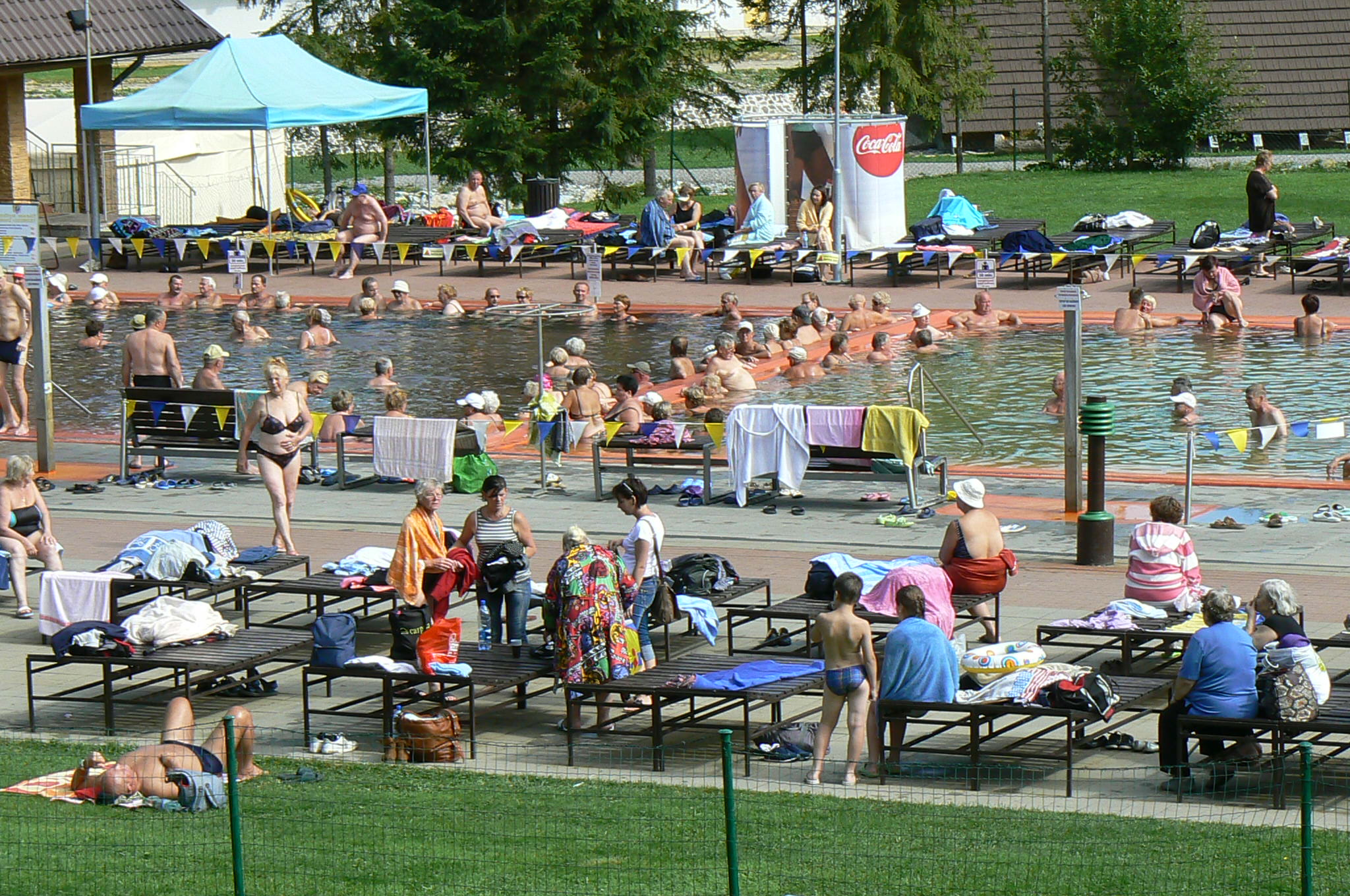 There were two thermal parks here. We arrived at 9:50. The first park, a rather old-fashioned place, opened at 11:00 and beside it, the big new Meander Thermal Park opened at 10:00. It was a no-brainer – we waited the few minutes for the posh place to open. I asked the young lady at reception where we could leave our bikes? At first she said that she did not know and then after thinking about it she said outside in the bike stands. Her bad attitude instantly started grating me. I followed up by asking where could we leave our panniers? She told me there were lockers, but our panniers would not fit in. She was just an employee and had no intentions of looking for a solution. We decided it was not worth it and cycled back to the old-fashioned hot-pools and hummed and hawed for a few minutes about waiting for hour for it to open. It is a good thing that we did not wait, because unbeknown to us our watches were still set on the wrong time zone, which would have meant a two hour wait. We were only 30 kilometres away from Zakopane and decided to instead drive back in the morning.

To my surprise the next 7.7 kilometres to Vitanová were all downhill. I think by this stage of the trip we were not taking so much in and were a little focused on getting to the guest-house. I had noticed rain-clouds in the sky a few hours previously and they seemed to be heading our way. Vitanová was where we turned a clear right and started seeing road signs for Poland. Right on this intersection was a short sharp discouraging climb. At the top was a few metres of scrub. It is always harder to find good toilet stops in pastoral land. So with a little desperation and little hesitation I went and had a chat with the cows.

Perhaps the highlight of my trip came in Hladovka. We came over the crest of a hill to see a long downhill stretch. I said to Sharon this is not good, if we go down then we need to go up. Sure enough we entered the village, crossed a creek and were presented with a long 12% climb. Just after I had changed down into first gear a severe looking little old man driving something that looked like a cross between a lawnmower and rotary hoe hauling a trailer full of hay pulled out from behind and proceeded to overtake me. I quickly grabbed hold of the trailer’s rear right. I greeted the old codger with a dobrý deň. He did not hear me, he was leaning forward into the wind and concentrating with everything he had. When he thought he had overtaken me he pulled right and drove me into the gutter. Fortunately just in time I managed to let go, drop behind him, dig on my peddles and grab the rear left of the trailer. This lovely old fella pulled me all the way to the top of the hill before pulling into someone’s house. It was not quite a free ride, I still had to peddle a little to keep my balance, but was so thankful that I was able to tick something else off my bucket-list. Sharon on the other-hand had to labour up the last serious climb of our journey all by herself. 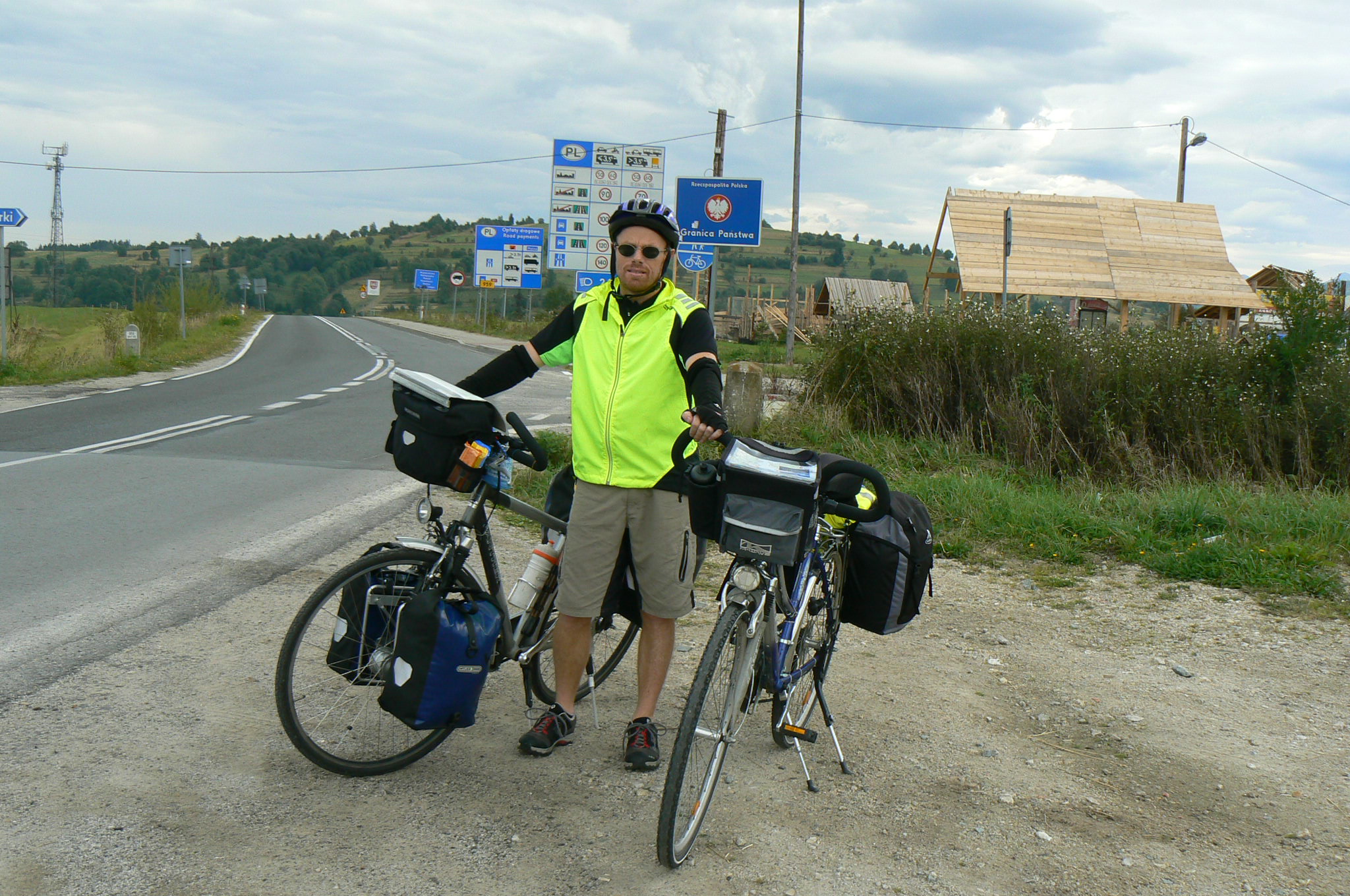 The border came quickly and was a relic of the days when there actually was a manned border. The road was lined with old cheap liquor stores and currency exchanges. It was only the third international border I had crossed on a bike, so it was still exciting for me and a great chance for the ‘I was here’ photo.

As soon as we hit Poland we were greeted by another beautiful cycle track, much the same as the one we cycled when leaving the country. It lasted about a kilometre, but because of the steep downhill gradient and it going up and down over driveways, I decided to stick to the road.

Very quickly we hit Chochołów. The first thing we saw upon entering the town was a café with three middle-aged foreign female cyclists sitting out the front enjoying a coffee. They could have been English and looked quite out-of-place. 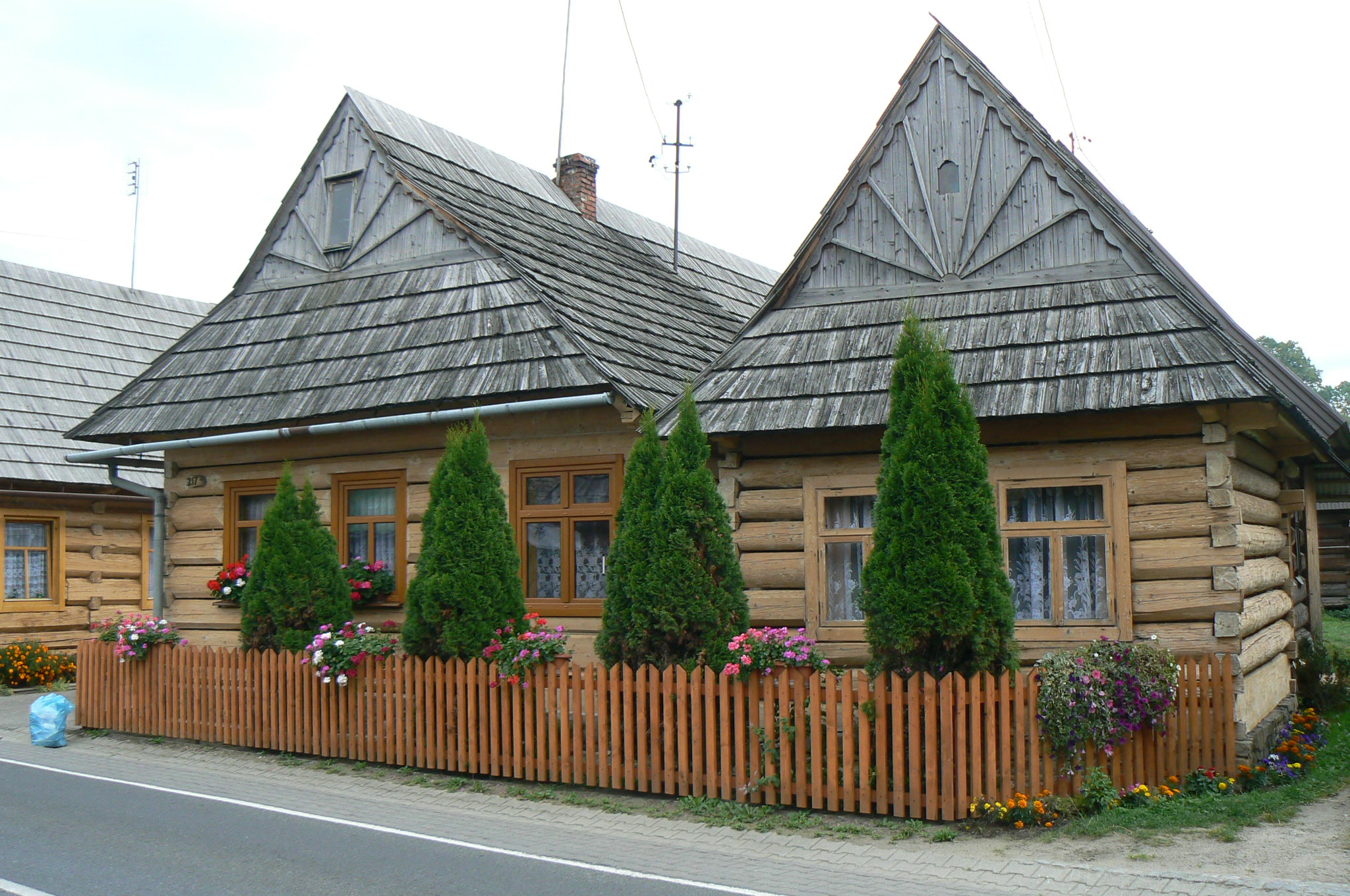 The village itself was beautiful, it was full of log houses with steep roofs and surrounded by flower gardens. It was quite possibly the prettiest village we have ever cycled through. We were not the only people to see the beauty of the place, it was also crawling with bus-loads of tourists. The only thing somewhat out of place was a very English-looking stone church. 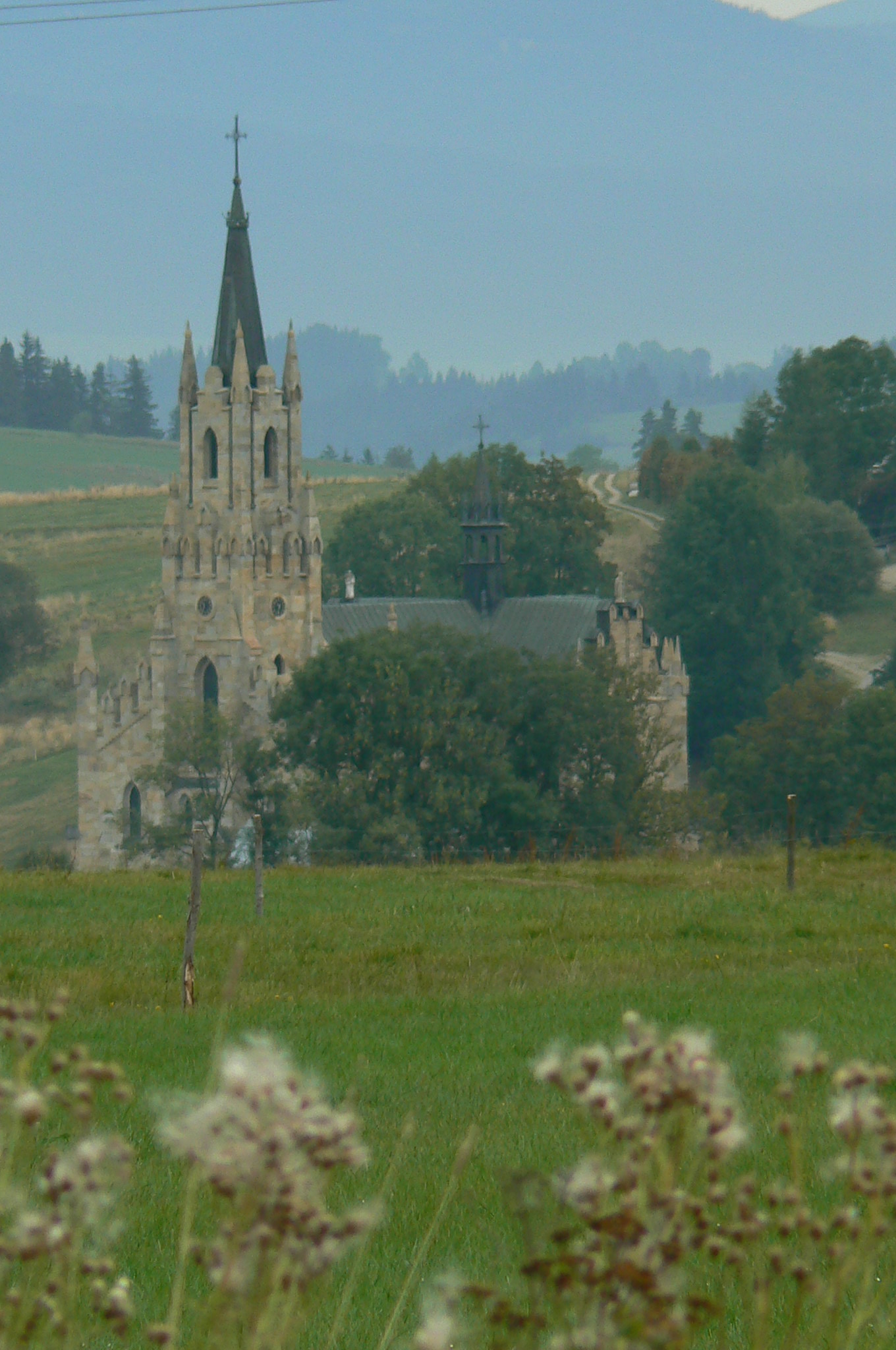 We returned to the café that had since been vacated by its sporty middle-aged women. The menu had sausage and sauerkraut on it, this made a perfect second breakfast and was washed down with perhaps the best espresso I have had. It also marked the return of friendly welcoming Polish service. 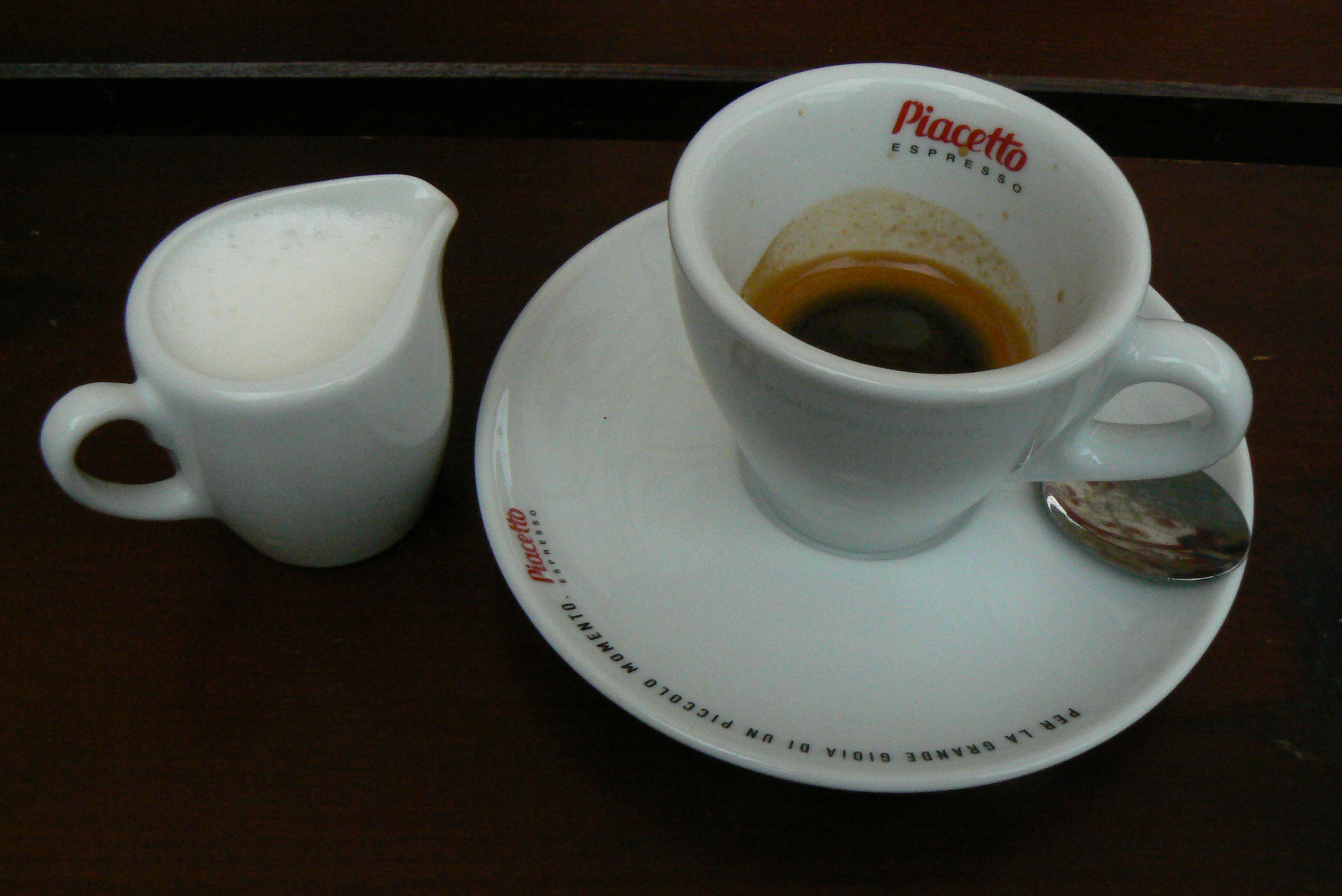 The final 15 kilometres of our trip was ugly, Polish roads are narrow and not pleasant for cycling. Most of the trip was uphill, overcast and with cars lining up to find safe places to overtake us. This section of road was almost one long Zakopane suburbia, I hated it. There were a lot of other cyclists on the road, most of them day-trippers.

I spotted a temporary speed-camera quietly sitting on the side of the road, I smiled and pointed it out to Sharon. At the same time a car sped past, it flashed and now my grinning mug is probably providing amusement to small town Polish police.

The pace needed to be picked up as the sky was positively overcast now. Part of me wanted to get rained on, I wanted to test out the water-proofness of my new front pannier and wanted to see how we would handle bad weather. But God loves my wife, knew what was up-ahead and had other plans.

We cycled into a slight headwind past many tiny windowless log cabins which were puffing smoke out their doors and chimneys. They just seemed to be scattered across the fields. People seemed to be stopping and buying something from them, I was curious, so stopped and asked another cyclist. They were selling smoked sheep’s cheese.

The next stop was a grovelly no-name tourist-infested dot on the map. There were lots and lots of buses and micro-buses, seemingly billions of people dressed ready to base-jump off Everest and lots of ‘no parking’ signs. There were even ‘no cycling’ signs, we were not welcome and did not really want to be. So we ate some food and I asked a young couple if it was all uphill into Zakopane or not. They said it was and thankfully they were wrong. We climbed a minor hill and then it was all downhill into the city.

It started spitting as we hit Zakopane, the roads seemed to get narrower, the traffic got heavier and the footpath and road become crowded with unpredictable camera-waving pedestrians. I tried to offer encouragement to Sharon, telling her it wasn’t far to go and that the mesh on the back of her gilet was supposed to be waterproof. It didn’t help, I could see Sharon was terrified and hating it. There were large trucks on the now slippery road who had nowhere else to go but through us.

As we rode through the town, I tried to keep off the road and cycled along the footpath and through car-parks, but in the end the only viable option was to get off and push. We were very glad when we entered the lane to our guest-house, I picked up the pace a little, partly because I like to finish strong and partly to open the gate for a suffering Sharon. 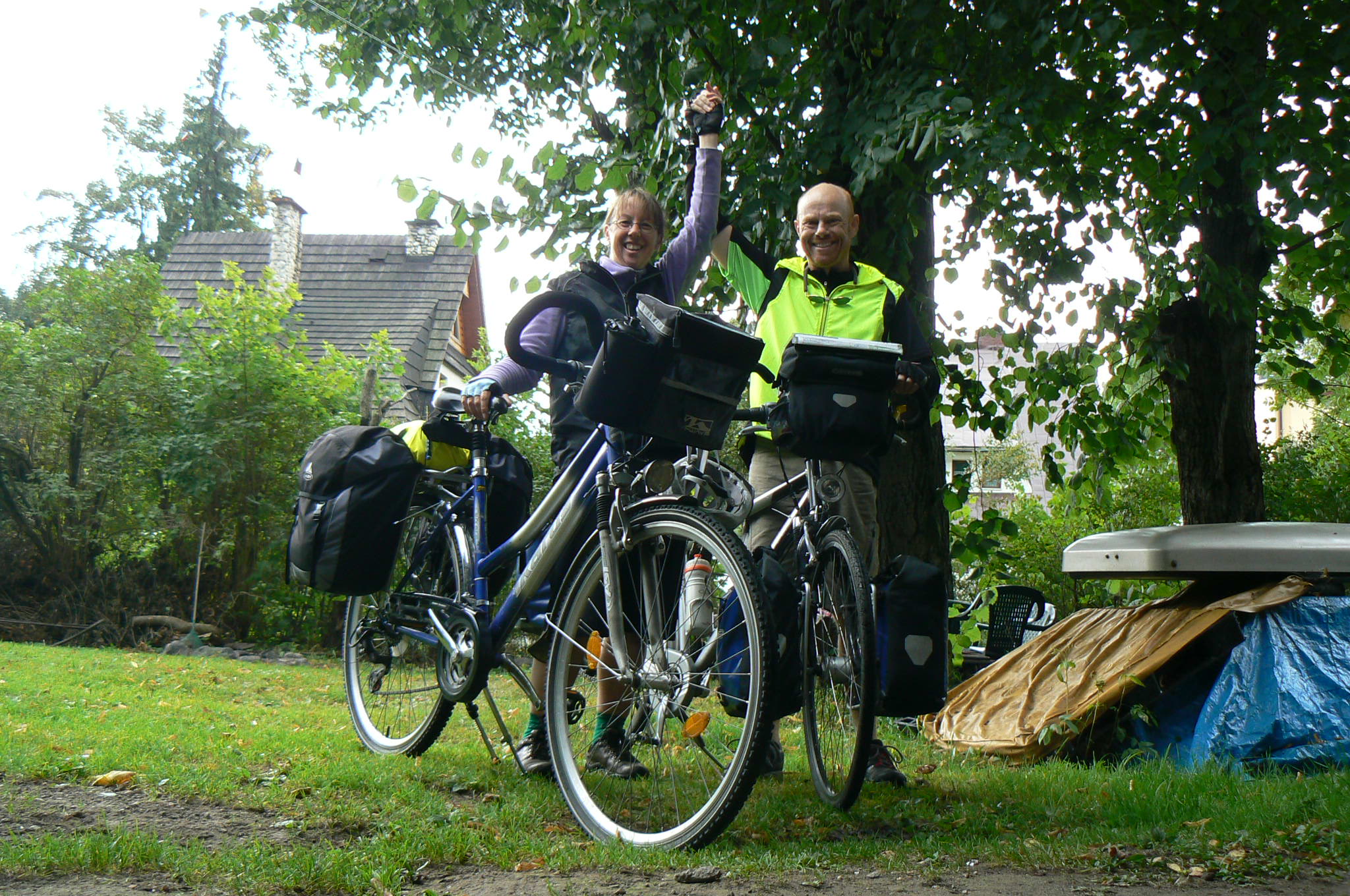 I tinkled my bell as I went in. Our host quickly appeared, told us she was cooking, gave us the key and disappeared again. We cycled to the back-door, propped my camera on an old box and took our ‘after’ photograph. No sooner had the motor-drive ceased working, than the heavens opened.  In a downpour we quickly relieved the bikes of their burdensome panniers.

I had left a bottle of excellent Lithuanian beer in the fridge, we popped the top to celebrate as the doorbell rang. It was our host, she knew the beer was in the fridge and had brought some smoked sheep’s cheese to go with it. We were tired, the cheese was good and we really appreciated the sentiment.

It was not a physically challenging day and scenically was quite pleasant until we hit Poland. Once it grew overcast and the Polish traffic picked up it was thoroughly miserable, now I was ready for a rest day.

It was a wonderful trip and I recommend it to anyone who would like a cycle adventure. That one major mountain was steep and long and is not for the faint-hearted, but hey, give it a go.