Slightly panicking I rode out of town. A few kilometres up the road I stopped a couple of tour-cyclists and asked where they had come from and where they were going and if they had seen my loving lost wife. They hadn’t, but agreed to pass on a message if they met her. I cycled on to Kuhle, turned around and cycled the 4.3 kilometres back to Dranske without seeing her. I asked again at the shop and we decided that I would return to the roadworks one last time before calling the police. 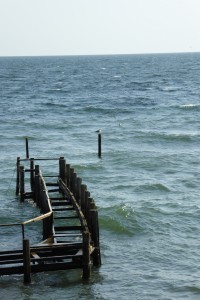 As I approached the roadworks, the silence was uncharacteristically broken by the sound of voices. I  spied the previously encountered tour-cyclists and following them chuntering away was my precious missing bride. We were both relieved and befuddled. The couple who had passed on my message were leading Sharon to the outsides of town. I had asked them to direct her to the shop in the town centre and then set her off cycling toward Kuhle and I would meet her on my way back. When I bumped into them they were escorting Sharon around the outskirts of the village. If I had been a minute later I would have totally missed her.

Sharon’s side of the story was that when she reached the town, she wisely waited at the entrance because this was the last place she had sighted me. She was quite concerned about how long it was taking me to return to her, but was seemingly content to read her book until being rescued by our new tour-cyclist friends.

I am not sure how many lessons we learnt from this experience, but am glad we learnt them in such hospitable territory. Hungry, we cycled to the shop and thanked them for their concern before riding out to the village supermarket. Again I couldn’t help but notice that on such good cycle paths Sharon was travelling uncharacteristically slow. We found a wee gazebo just off the bike path, stopped and cooked a very very late lunch

We flew through Kuhle. Following the lagoon south, we passed Wiek and rode fun cycle tracks all the way to the Wittower Ferry. We stopped there for breakfast – yes, breakfast. Our day was so muddled we had yet to eat our breakfast rations and had no idea where or when supper would be.

We turned west again and travelled rough concrete-block roads indicative of a communist past. Eventually we ambled our way into the very picturesque village of Schaprode. We stumbled across public toilets and since our water bottles were empty, decided to pay and both empty and refill our systems. It was late in the day and the woman serving us wanted to get home. She was visibly angry at me for filling my water bottles and was murmuring all sorts of German words I am sure I could not repeat. This quiet sour barrage only increased when I opened the toilet door and asked Sharon to pass me her bottles.

Regretting that we did not have more time and aware of the fading light, we continued riding. It turned out a ferry had just docked and seemingly millions of people needed to be driving down the same narrow road as us. In any other country this would have been a horrific problem, but not here in Germany; these people know how to respect road users of the cycling variety.

Because of time and light, we had decided to take a shortcut and follow busier roads into Trent. In Trent we stopped in a rather posh outdoor restaurant for a healthy Coke and pee. By now we were riding with lights on and appreciating our excellent Endura high-visibility gilets. We hurriedly rushed the next five kilometre stretch of main road. Again even when Sharon was trying to rush, for her she was annoyingly slow. Somewhere at the back of my brain this was beginning to concern me.

We turned right and followed a lovely quiet road into the night and into Gingst. It was a warm evening; people were sitting in outdoor restaurants, silently enjoying their evening meals. We set out to find a guest-house. After encountering some helpful people, we concluded the town was either booked out or ridiculously out of our price range.

By now it was dark. I was riding with one hand on the handlebars and the other shining Sharon’s torch on my map. We had decided to navigate another shortcut until we found a quiet place to pitch our tent. We hung a left and set out through the night across a narrow concrete track through a farmer’s field. This was not a problem for me; I have a dynamo in my front hub that provides excellent light. On the other hand, Sharon had to be considerably braver. Her battery powered flickering front light was designed only to be seen and was totally useless for illuminating the path in front. She had to rely on the moon and my light.

She did this for the next five kilometres until we happened across the sleeping hamlet of Landow. We nestled ourselves behind a farmer’s barn, threw our ground-sheet across the evening dew, made a cuppa tea and ate some delicious pastries we had been carrying for the last thirty kilometres. We spent the next wee bit watching stars and satellites, talking through the day and generally being glad we were still together.

This day and evening I travelled 94.14 kilometres and Sharon probably clicked over around 85. Though the day had many adventures which threatened to ruin it, we chalked it up as a good day. We pitched the tent for our final night on peaceful Rügen Island and contentedly drifted off to sleep.