My best ever sleep took place on a crowded dog and chicken infested Filipino ferry. This Baltic morning I woke rested and ready for adventure. First job of the day was to stuff myself with as much buffet breakfast as possible. I had learnt on previous crossings that the morning grub on these ferries is only just passable for food. We were dining with a rather helpful German friend and her son; together they provided a happy distraction that enabled me to scoff a huge cooked breakfast, almost totally without gagging.

Then next thing we knew, we were rounding the heads of Kiel Harbour. It was another pleasant day, so I whiled away the morning leaning over the deck trying to spot the camping ground we would be staying in on our last night. I spotted three possibilities and am not sure if any of them were correct. 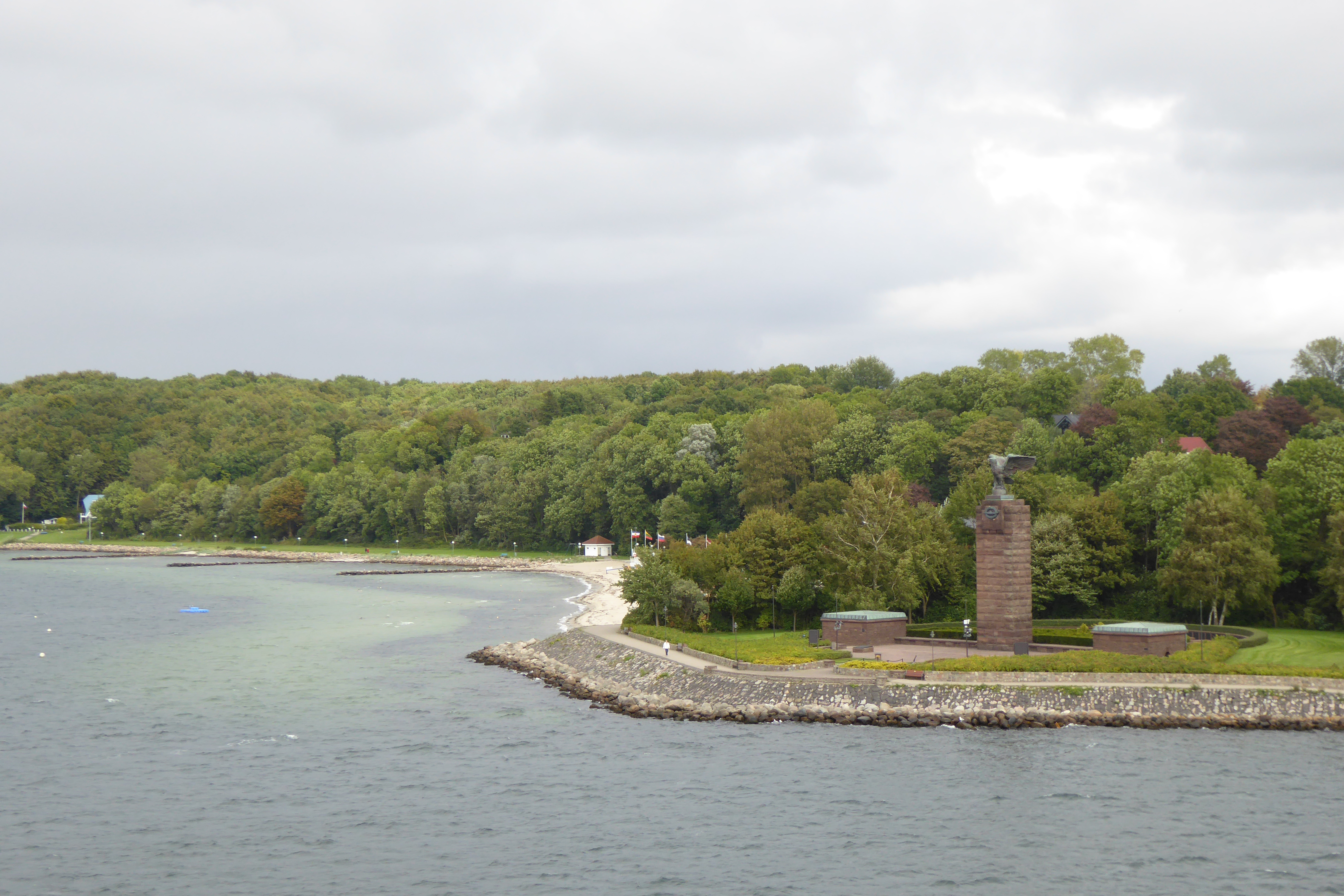 I learnt from my first pannier carrying exercise and rearranged some of my straps and had a much easier trip from the cabin to our relieved-looking bicycles. One thing for sure, bicycle panniers are designed for bicycles not people. Loading our bike was quite a scary ordeal; men were screaming, trucks and forklifts were zooming around us and metal chains were bouncing off metal floors. We got off that boat as quickly as we could. We had cycled all of 20 metres when we were greeted by our first efficient and stern German. ‘Stop, wait, follow the bus.’ I froze and moved towards the designated waiting spot. We had been waiting only a few minutes when another stern man who secretly was smiling on the inside commanded us to ‘just go’. So like a flash we were gone, cycling on smooth tarmac between containers, logs and articulated lorries. We stopped and asked some startled official-looking types if they wanted to perhaps see our tickets, passports or anything. They waved us on and out into the big dangerous Federal Republic of Germany. It was so exciting, here we were actually cycling through a German city.

I am dyslexic, I live with a continuous cinema of pictures, diagrams and maps floating through the sparse recesses of my head. Finding Kiel station was going to be a simple process. Keep the water to my right and cycle until we intercept a red D2 sign. The red D2 sign signifies the Baltic cycle trail that runs from Poland to Denmark. Everyone had told me how Germans love their cycle paths and signposts, so this was not expected to be a problem.

We cycled south along the road until we hit our first cycle path. Joining the path, we continued. There were signs, quite a few of them, but the red D2 one seemed to be rather elusive. I spied a familiar-looking corner and decided perhaps it was worth stopping to examine my printed google map. Yep, we were for sure on the D2, yep the D2 turned right down a minor street towards a bridge at this very point and nope, it was not signposted at all. Oh dear, was this a sign in itself, a sign of things to come? Yes it was; we were soon to learn that Germany has a lot of signposts, however not that many were going to prove to be useful for us.

So we rode on over a really cute little bridge and into a rather smart residential suburb. We stopped at the first supermarket we could find. Designated cycle racks in cities are next to useless for our well-laden tour bikes. We pulled into a car-park. Both our bicycles have two stands each attached to their undercarriage. This means our bikes can independently stand under the weight of six panniers. Sharon dashed into the supermarket, I stood point on our bikes. A few minutes into my duties, I watched another cyclist rush into the marked cycle rack zone, jump off his bike and start to lock it, only to be attacked by a leashed dog. Mental note, keep away from public bike stands and German dogs.

Eventually Sharon resurfaced with our lunch and supper and we were away again. Kiel was beautiful for cycling: there were flat well lipped cycling paths running everywhere, just no signs telling us what these cycle paths were and where they were going. Before we knew it, instead of crossing a bridge in front of Central Station, we were heading down a hill and on a cruise liner. The only thing that really stopped us was a barricade and an ounce of common sense. We were supposed to have taken the unsignposted second right.

We found a lovely sunny spot to people watch. Sharon sat there, snacked, and kept an eye on our bikes while I moseyed into the station’s ticket office. I had two goals: I wanted a map of German train-lines and to see if we could catch on earlier train than planned. After a few minutes of trying to read German in an effort to find a map, I bumped into our friend again. She was also in search of an earlier journey.

The person at the ticket counter spoke excellent English for me. Yes, we could get earlier tickets and no, we couldn’t have the layover between trains extended. This was mostly good news, but it also meant that I now had about twenty minutes to find Sharon and get us both onto the train. I sped out on the concourse found our departure platform, rushed off searching for the station’s disability/cycle entrance, then ran down the stairs in search of Sharon.

I could see my wife in the distance sitting enjoying the sun, looking the other way and oblivious to her rushing husband trying to run in cleated cycle shoes and chaffing chamois shorts. As Sharon turned, she was greeted by her husband slightly sweating waving his arms frantically and pointing towards the train station. We were about to leave two hours earlier than planned. We jumped on our bikes just as it started spitting and quickly followed a painted line on the pavement that took us all the way to the station’s disability entrance. We quickly pushed our bikes through the station, on to our platform and directly on to the cycle carriage of a very modern train. It really could not have been much easier; I was impressed. I secured our bikes beside a very serious-looking young couple and tried unsuccessfully not to bump their child’s stroller. Suitably scolded by this friendly couple I sat to relax just as the welcome smiley face of our German friend appeared in the doorway. Sharon had lost her boggle; I had mentioned that I was trying to find a new one. She handed over one of hers, wished us well and snapped a fantastic photo of the very excited Mrs and Mr Fowler. Shortly after, the doors closed and we were on our way. 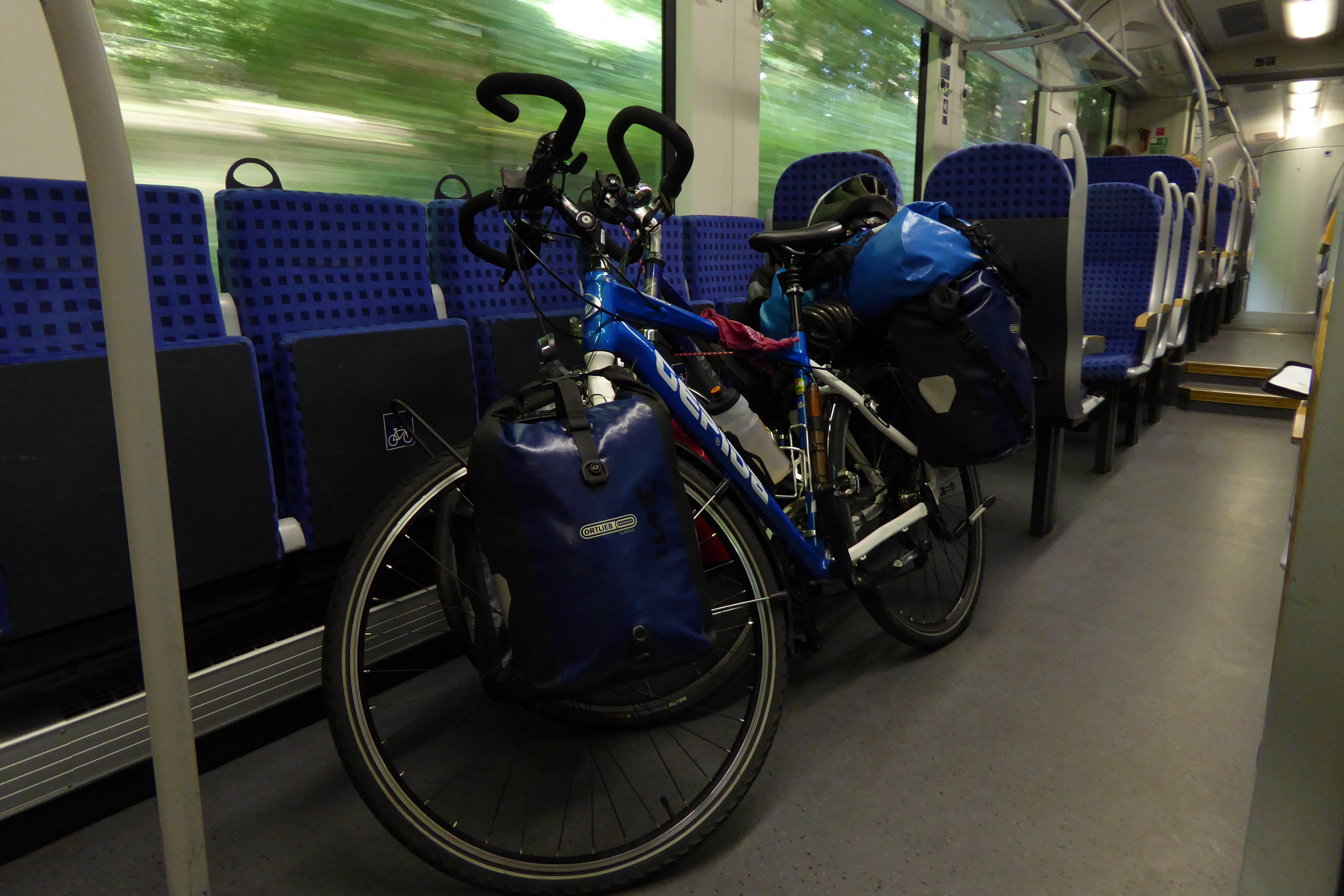